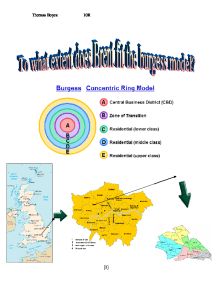 to what extent does brent conform to the burgess model

Contents Introduction 3-6 Hypothesis 7 Methods 8-9 Analysis of Kilburn 10-13 Analysis of Willesden Green 14-17 Analysis of Stonebridge 18-21 Analysis of Preston 22-25 Analysis of Kenton 26-30 General results 31 Housing prices 32-33 Conclusion 34 Evaluation 35 Appendix 36-37 To what extent does Brent fit the Burgess model? In this investigation I will be investigating 5 wards, which have been carefully chosen to go from the south to the north of the borough Brent. I will be investigating these wards to see whether or not Brent fits the Burgess mode therefore to do this I will travel through these 5 wards collecting various types of data. Patterns of land use in cities have often been demonstrated by urban models (theoretical framework). There are three popular types of the urban model. There are the: Hoyt's sector model, the multiple nuclei model and most well known; the Burgess model. Urban Models Burgess model, developed by E.W. Burgess, identified social-ecological zones radiating out from the Central Business District. Ethnic communities, factories, and slums, known as the transition zone, surround the CBD. Outside the transition zone lays a zone of working class housing with higher income residents living in the outer commuter ring. The Hoyt Sector Model, developed by Homer Hoyt, emerged in 1939 to explain urban growth and expansion and the location of urban land uses. Hoyt recognized that over time a city expanded from the Central Business District along the major transportation lines, such as highways and railroads. This process creates distinctive economic sectors within the city, influenced and contained by the major highways, railroads, and waterways. The multiple nuclei model, Geographers C.D. Harris and E. L. Ullman developed the multiple nuclei model in 1945. According to this model, a city contains more than one CBD. Some activities are attracted to particular area while others try to avoid them. For example, a university may attract well-educated residents, pizzerias, and bookstores, whereas an airport may attract hotels and warehouses. ...read more.

The environmental survey showed how the area is like. Environmental Survey In my hypotheses it states as you move from the north to south of Brent the traffic will be more congested. This is shown in this survey as traffic free got a score of 1. This shows that Kilburn is a very busy area. Willesden Green; St Paul's Avenue consisted of only a few terraced houses with flats owning the majority of the road this goes against my hypotheses of the fact that there will be more terraced houses in the south of Brent. This anomaly may have occurred because more living space was required from this area. This yet again proves my hypotheses to be correct as it shows there are not any semi detached or detached houses on this particular road. Type of Dwellings vacant Whole house or bungalow: Flat; maisonette or apartment: Caravan or other mobile or temporary structure detached semi- detached Terraced Part of a converted or shared house In commercial building Total 156 148 599 994 2042 275 5 % 3.0 2.8 11.2 18.6 38.2 5.1 0.1 Borough average 2.0 6.7 29.3 19.0 16.9 1.9 0.1 This matches with my data from St Cuthbert's Road that there would be more terraced houses than detached. However, there are more maisonettes showing again; the closer to the city the more housing is needed to accommodate people. However it does not have a drive way, this is not typical for a house nearer to the city centre. As you can see from this overhead photo Willesden Green is fairly grid like as expected as you go further south of Brent as my hypotheses states. The environmental survey This shows there is less traffic here than in Kilburn showing that as you go further away from the city centre the less traffic there seems to be. Stonebridge; Aldbury Avenue had many more semidetached houses than in any road more southern than this one. ...read more.

4. I expect as you move from South to North Brent the area will be less grid like. This is true as there were more grid-like areas in Kilburn and Willesden Green as it gets more crowded and the housing density is higher in the lower parts of Brent. 5. I expect as you move from the South to the North of Brent the environment will be much cleaner and will be much quieter because there will be less people passing by. This is true to the extent that this was usually the case. This due to the fact that as you went further south the area was either more crowded and congested or just a lower standard of living. 6. I expect that as you move from the South to the North of prices of houses will decrease. This was fairly true and this is because the South of Brent is closer to the CBD, therefore the competition for property is healthier. To what extent does Brent fit the Burgess Model? I feel that as my investigation went on; you could see the change in Brent, for example, the difference in traffic and open space. There was more open space in the north of Brent. I feel that Kilburn looked a very rich area but that was jus a certain part of Kilburn that I researched. The North of Brent appears to be in the medium class of the Burgess model. This is because it contains more interwar type housing. The centre and more southern parts of Brent appear to be in the 'inner city' zone because the area seems to only consist of terraced housing. I feel that this investigation is quite fair as I have investigated 5 different areas in Brent to see the change in environment and housing as you move from the North to South of Brent. Appendix Census Data: http://www.brent.gov.uk/demographic.nsf/61b63a407eca7a438025663c0065cadd/1444fe88cc2376cd80256cd8003aabd8/$FILE/census_ammend.pdf http://www.brent.gov.uk/demographic.nsf http://www.brent.gov.uk/demographic.nsf/24878f4b00d4f0f68025663c006c7944/2f92474dabbecec480256ef3003b951e?OpenDocument http://www.brent.gov.uk/demographic.nsf/Documents/Willesden%20Green%20Ward?openDocument Street maps http://www.streetmap.co.uk/newmap.srf?x=525250&y=183250&z=1&sv=525250,183250&st=4&lu=P&mapp=newmap.srf&searchp=newsearch.srf&ax=524991&ay=183770 http://www.streetmap.co.uk/newmap.srf?x=522500&y=184500&z=1&sv=522500,184500&st=4&lu=P&mapp=newmap.srf&searchp=newsearch.srf http://www.streetmap.co.uk/newmap.srf?x=517500&y=188500&z=1&sv=517500,188500&st=4&lu=P&mapp=newmap.srf&searchp=newsearch.srf&ax=517500&ay=188500 http://www.streetmap.co.uk/newmap.srf?x=518500&y=187500&z=1&sv=518500,187500&st=4&lu=P&mapp=newmap.srf&searchp=newsearch.srf&ax=518500&ay=187500 Urban model information http://en.wikipedia.org/wiki/Urban_structure Brent history information http://en.wikipedia.org/wiki/London_Borough_of_Brent house prices information http://www.home.co.uk/guides/house_prices_report.htm?location=kilburn&lastyear=1 http://www.home.co.uk/guides/house_prices_report.htm?location=ha9&lastyear=1 http://www.home.co.uk/guides/house_prices_report.htm?location=ha3&lastyear=1 Thomas Boyce 10R [1] ...read more.