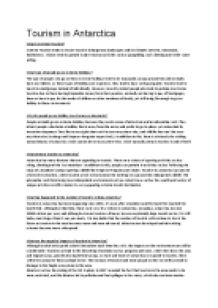 Transfer-Encoding: chunked ﻿Tourism in Antarctica What is Extreme Tourism? Extreme Tourism tends to involve tourism in dangerous landscapes and/or climates (Deserts, Mountains, Rainforests). Visitors tend to partake in adventurous activities such as paragliding, rock climbing and white-water rafting. What type of people go on extreme holidays? The type of people who go on these extreme holidays tend to be reasonably young (around 30) and normally have no children. As these types of holidays are expensive, they tend to have well-paying jobs. Tourists tend to travel in small groups instead of individually. However, recently retired people also tend to partake in extreme tourism, due to them having disposable money from their pension, normally not having to pay off mortgages, loans or have to pay for the needs of children or other members of family, yet still being fit enough to go on holiday in these environments. Why do people go on holiday in extreme environments? People normally go on extreme holidays because they seek a sense of adventure and an adrenaline rush. ...read more.

What are the negative impacts of tourism in Antarctica? Although tourists only spend a short time ashore each time they visit, the impacts on the environment can still be considerable. Tourism can lead to the disturbing of animals such as penguins and seals, which then leave the area and migrate away, possibly leaving behind young. As more and more of Antarctica is exposed to tourists, there will be less areas for these animals to live. The increase of tourism and more people on the ice shelf can lead to damage to the fragile ecosystems in the area. Disasters such as the sinking of the MS Explorer in 2007 revealed the fact that tourism in the area needs to be more restricted, and this disaster led to pollution and fuel spillages in the water, which also can harm marine ecosystems, which can then take years to recover. Oil spills, although reasonably infrequent, are major threats to nearby wildlife. Increased tourism is also bringing about the invasion of alien species and spores into Antarctica, and although species such as the Mediterranean mussel will ...read more.

are not allowed to enter Antarctic waters. The number of cruise vessels at any one site in the Antarctic has been limited to 40, and only one ship is allowed to land at each site at once. In addition to this, no waste or litter is to be left at the tourist sites, tourists are not allowed to walk on the lichens or moss and no tourist is allowed to go within 5 metres of an animal. All tour guides are officially trained and are experienced scientific personnel who have been involved in research in Antarctica. Waste disposal is tightly regulated, with prohibitions of the dumping of waste anywhere in the Antarctic continent, with ships now having purpose-built waste containment facilities. This shows how sustainable tourism in Antarctica is a high priority, and how there are many measures taken to minimise the negative impacts of tourism. Although these measures are effective now, it is unknown whether they will stay in place in the future, and if Antarctica will retain its title as the ?World?s last true wilderness? for much longer. ...read more.