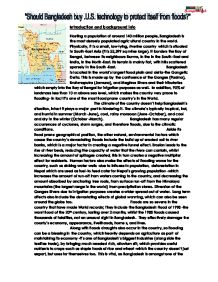 US methods in Bangladesh

Introduction and background info Hosting a population of around 140 million people, Bangladesh is the most densely populated agricultural country in the world. Physically, it is a small, low-lying, riverine country which is situated in South-East Asia (it is 55,599 sq miles large). It borders the Bay of Bengal, between its neighbours Burma, in the in the South-East and India, in the North-East. Its terrain is mainly flat, with hills scattered sparsely in the South-East. Bangladesh is located in the world's largest flood plain and delta-the Gangetic Delta. This is made up by the confluence of the Ganges (Padma), Brahmaputra (Jamuna), and Meghna Rivers and their tributaries which empty into the Bay of Bengal for irrigation purposes as well. In addition, 90% of landmass less than 10 m above sea level, which makes the country very prone to flooding- in fact it's one of the most flood prone country's in the World. The climate of the country doesn't help Bangladesh's situation, infact it plays a major part in hindering it. The climate's typically tropical, hot, and humid in summer (March-June), cool, rainy monsoon (June-October), and cool and dry in the winter (October-March). Bangladesh has many regular occurrences of cyclones, storm surges, and therefore floods, due to the climatic conditions. Aside its flood prone geographical position, the other natural, environmental factors which cause the country's devastating floods include the build up of eroded soil to river banks, which is a major factor in creating a negative funnel effect. ...read more.

Pros: It allows rivers to hold more water and not flood so much in the surrounding area, this still allows some flood water to provide alluvium silt for agricultural usage, and doesn't affect the economy as well, much. * Dams and reservoirs-water is usually stored in a reservoir (fresh water supplies store-like a large lake), behind the dam, which is a large retaining wall, stopping water from flowing in a particular direction/way. Pros: Water can be used for hydroelectric power, which in turn can create positive multiplier effects such as creating jobs, and strengthening the economy using power for industrial/ manufacturing usage. Stored water can also be used for recreational purposes. * Truncating-cutting off meanders, so the river course is straighter, and doesn't disperse its water. Pros: Water travels in a certain direction, so it's not spontaneous, so that it can be monitored more easily, and measures can be made to strengthen the protection in its route to mitigate flooding. * Mattresses- these are heavy concrete blocks which stops the river embankments from eroding. Pros: Mitigating erosion means that the rivers are strengthened, to prevent outbreaks of water, from breaking the banks, and also to prevent landslides from disastrous landslides occurring. These methods do have there disadvantages too. 'Hard' engineering options are very expensive. Bangladesh is an LEDC, and don't have enough capital generation to be able to afford to use most/any of these techniques. ...read more.

In conclusion to the essay question, "Should Bangladesh buy .U.S. technology to protect itself from floods?" I have come to a decision that the facts shows us that Bangladesh should NOT buy .U.S. technology to protect itself from floods, because in general they are too expensive, and can not guarantee success. First of all, I think that the country should look into 'soft' engineering options such as afforestation. This is where trees are planted near the river, so that there is greater interception of rainwater and lower river discharge. This is a relatively low cost option, which enhances the environmental quality of the drainage basin. I think that this should especially be done close to the Himalayas, as this is where a lot of precipitation is released from stores. Shrubbery will intercept the water, and so less water will run-off and so there will be less flood water. If this method is not able to be put into action, then I think that it would be wise to undergo river engineering, and it is therefore wise to buy levees, as they are the most efficient, and have less disadvantages, they are also more affordable, as dredging rivers will not be able to make them deep enough, as Bangladesh is situated on low lying land. Ecological flooding (where the river is allowed to flood naturally, to prevent flooding in other places e.g. settlements) is also not a good option because this has been proven to cause mass destruction. ...read more.