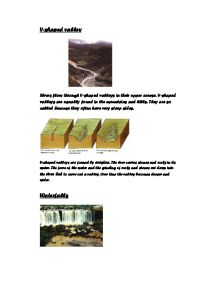 V-shaped valley Rivers flow through V-shaped valleys in their upper course. V-shaped valleys are usually found in the mountains and hills. They are so called because they often have very steep sides. V-shaped valleys are formed by erosion. The river carries stones and rocks in its water. The force of the water and the grinding of rocks and stones cut down into the river bed to carve out a valley. Over time the valley becomes deeper and wider. Waterfalls A waterfall is formed where water flows over a cliff or very steep drop in the river's bed. There are two types of waterfall 1. Cataracts are found where there are many rapids in a large river. A large volume of water flows down these rapids. 2. Cascade waterfalls have a small volume of water. A series of falls may form one waterfall. Formation Different rates of erosion Waterfalls are usually found in the upper course of a river in the hills or mountains. The Dunn's River Falls in Jamaica is the only known waterfall which forms the mouth of a river. ...read more.

Clay is an impermeable rock. The water gradually builds up between the boundary of impermeable and permeable rocks. Eventually, it trickles out of the rocks. The source of the River Len is a spring. Rills and streams. A lot of rain falls on mountains. Rainwater flows down slopes and quickly makes channels. At first the channels are small. They are called rills. These join together to make bigger rills. Finally a stream is formed. The streams join up to make a river. Lakes. The source of some rivers is a lake. The source of the River Nile is Lake Victoria, in Burundi. Melting snow and ice. Water from a melting glacier may be the source of a river. The snow and ice melt when the weather gets warmer. This forms a lake in front of the glacier. The water rushes into channels in the V-Shaped valley and eventually forms a river. Bogs. In some places, rain water can't sink into the ground as the ground is too wet already. The water forms a bog. The soil and plants nearby soak up the water. ...read more.

There is a lot of spray in a plunge pool at the bottom of a very large waterfall. Rapids At the rapids, the river is shallow and flowing very quickly over rocks, boulders and stones sticking out above the water level. Formation Rapids form in a similar way to waterfalls. The river bed drops down steeply, but not as a cliff, otherwise a waterfall would form. Rapids can often be found above waterfalls where the river bed is starting to drop. Rapids form a layer of hard rock on the river bed. Interlocking Spurs interlocking spurs are alternate hills in the river valley. The river does not have a high water volume at this point and even though it is fast flowing, the river cannot laterally erode (sideways) to remove the spurs. Because of this, the river has to flow around the spurs, eroding vertically. Potholes as the river is vertically eroding in the Upper Course, potholes can be created when larger pieces of load that the river cannot remove by traction are twisted around by eddy currents. The river is not strong enough here to pull the large boulder in the diagram, and the obstruction creates a swirling motion in the water. Eventually, the boulder creates a pothole, by abrasion on the river bed. ...read more.