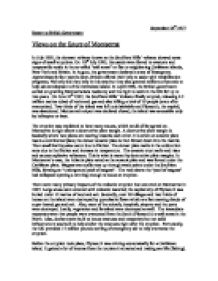 Views on the Future of Montserrat. There were many primary impacts of the volcanic eruption that occurred on Montserrat in 1997. Large areas were covered with volcanic material;

September 24th 1977 Report to British Government Views on the future of Montserrat In July 1995, the dormant volcano known as the Soufriere Hills' volcano showed some signs of small eruptions. On 18th July 1995, thousands were forced to evacuate and temporarily reside in the so-called "safe areas" or flee to neighboring Caribbean islands, New York and Britain. In August, the government declared a state of Emergency. Approximately four months later, Britain offered their help to assist with rehabilitation programs. Not only did they help in this way but they also granted millions of pounds to help aid development of the victimized island. In April 1996, the British government settled on granting Montserratians residency and the right to work in the UK for up to two years. On June 25th 1997, the Soufriere Hills' Volcano finally erupted, releasing 4.5 million metres cubed of rocks and gas and also killing a total of 19 people (even after evacuation). Two-thirds of the island was left uninhabitable and Plymouth, the capital, was abandoned. Montserrat's airport was declared closed; the island was accessible only by helicopter or boat. ...read more.

Fortunately, the UK provided 17 million pounds sterling of emergency aid to help overcome the eruption. Before the eruption took place, Plymouth was striving economically for a Caribbean island. It gained a lot of income from the tourism it attracted and trading sea life (fishing). Unfortunately, the secondary impacts of the eruption would affect the previous economically gaining factors of Montserrat. The geologists have gathered and predicted that tourists would stay away from Montserrat, therefore disrupting the economy. Also, the volcanic ash from the eruption had been predicted to destroy the marine life of Montserrat. In the future, it is possible to reduce the impacts of volcanoes, even if it is not possible to stop the actual eruption itself. Unlike Earthquakes, it is possible to predict approximately when a volcano is going to erupt. Scientists have the knowledge and instruments to monitor signs that come before a volcanic eruption. Also, hints such as tiny Earthquakes, escaping gas and change of shape of the volcano all mean an eruption is most likely. ...read more.

Aids should be promoted for LEDC's. Montserrat has suffered tremendously but the aid from the British governments has helped them overcome their problem and actually help rebuild their infrastructure. All of the strategies discussed above were all sustainable, effective and environmentally friendly. Though, Montserrat at that time did not have enough knowledge and financial aid to afford any of those schemes discussed. Predicting eruptions requires special equipment and trained scientists, which makes it expensive. Also, building techniques can be extremely expensive. Though if maybe a risk map showing all the zones of safety and exclusion was to be distributed to the citizens, less people would have died or been injured. In terms of the future of Montserrat, it is possible that a smaller community would live there, achieving an optimum population. Also, the capital Plymouth may be abandoned, as it is too close to the active volcano. There is a possibility that tourism might actually increase instead of decrease as it did with Mount St. Helens. This is because more people would want to visit the volcano. In terms of long terms responses, it would be good of Montserrat if they set up some sort of Volcano Observatory and predict future eruptions. ...read more.