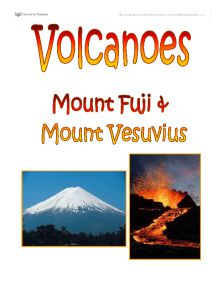 Volcanoes Location Page 1 Why did they erupt? Page 2 Human Impact Page 3 Physical Impact Page 4 Similarities & Differences Page 5 Conclusion Page 6 Bibliography Page 7 The volcano, Fuji, is found on the southern Honshu Island in Japan. It is the largest and most popular volcano in Japan, rising to 12,388 feet (3,776 m) above sea level and has a perimeter base of 50km. Fuji is a typical cone shaped volcano and has kept its shape for around 5,000 years. Fuji consists of three different volcanoes called Komitake, Ko-Fuji and Fuji which lie one upon the other. Mount Vesuvius is a volcano in the east of Naples in Italy. The volcano is over 17 000 years old and is still at this moment, active. It is only 4190 feet tall (1277 m) with a base of 48km (3 miles) but its past eruptions have been very dangerous, killing a vast amount. So far Vesuvius has had 50 eruptions and in only one of these eruptions, it has killed over 3 000 people. ...read more.

Following that, rumblings went on from December 21st and stopped completely on the morning of January 1st. Mount Vesuvius eruption was caused by two tectonic plates called the African and the Eurasian plates which collided together causing the heavier plate to push under the other and into the mantel where is begins to melt. Some of the mantle's heavy rock melts which creates a slow moving substance called magma. Because the magma is lighter than its surrounding rock, it begins to rise into the magma chamber. The magma chamber soon erupts and the magma rises to the top of the volcano and out of the main vent, oozing out through cracks and vents on its way. No deaths were recorded as a direct result of this volcano however many people lost their lives from starvation after the irruption. This was because they were unable to obtain food from their farm land or get to other places. Volcanic ash erupted out of Mount Fuji causing health problems and this sometimes also caused death. ...read more.

Mount Fuji and Mount Vesuvius are both cone shaped and there is alikeness between the bases of each volcano. Both eruptions caused a lot of problems with crops, buildings and houses leaving people very starved and this related to death. The differences between Fuji and Vesuvius are that Fuji is moderately larger than Vesuvius and there were many more deaths from the eruption of Vesuvius then Fuji. Also, the eruption of Vesuvius contained lava rather than the eruption of Fuji. In conclusion, this presentation has discussed the major irruptions of Mount Fuji & Mount Vesuvius. They both caused huge disruptions to human life such as large numbers of deaths and the environment such as flooding and destroying tents, buildings and crops. Although these are two very separate volcanoes, this paper highlighted the similarities between them. From this presentation, I have learnt about volcanoes that in the past, have never heard of and what damages these volcanoes have caused. I have found it hard to find information about these volcanoes, but overall, I have enjoyed doing this presentation. http://park.org/Fuji/pinatubo/index.html http://www.absoluteastronomy.com/topics/Historic_eruptions_of_Mount_Fuji http://www.fujisan-net.gr.jp/english/4_04.htm http://www.cotf.edu/ete/modules/volcanoes/vmtvesuvius.html http://www.volcanolive.com/vesuvius.html http://hakone.eri.u-tokyo.ac.jp/vrc/others/fuji.html http://www.vesuvioinrete.it/e_storia.htm http://www.tooter4kids.com/Japan/mt_fuji.htm ...read more.

The candidate answers the question moderately well. They describe the different volcanoes well, although the level of detail is lacking in places, and could be analysed a bit deeper, and they compare and contrast the volcanoes to a limited degree. ...

The candidate answers the question moderately well. They describe the different volcanoes well, although the level of detail is lacking in places, and could be analysed a bit deeper, and they compare and contrast the volcanoes to a limited degree.

The introduction is done well with the description of what type of volcanoes the ones being investigated are and where they lie. To improve the candidate could include where they lie next to fault lies, and how their activity compares. The candidate moves on to compare the location, how this influences the eruption and devastation the volcano can cause which is good, but rather than them being stand alone topics the candidate should really contrast and compare between the two. They do contrast similarities and differences to a basic level of detail. The conclusion is not really adequate because it does not bring together the essay and what they have investigated.

Minor spelling mistakes in places. Spelling, grammar and punctuation all to a decent level in spite of this. Tone of this essay is good, and the format is large and essay to read.