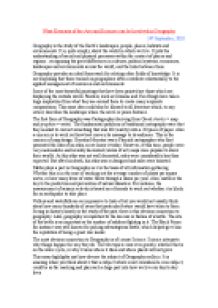 What Elements of the Arts and Sciences can be Involved in Geography?

﻿What Elements of the Arts and Sciences can be Involved in Geography 24th September, 2010 Geography is the study of the Earth?s landscapes, people, places, habitats and environments. It is, quite simply, about the world in which we live. It puts the understanding of social and physical processes within the context of places and regions - recognising the great differences in cultures, political systems, economies, landscapes and environments across the world, and the links between them. Geography provides an ideal framework for relating other fields of knowledge. It is not surprising that those trained as geographers often contribute substantially to the applied management of resources and environments. Some of the most beautiful paintings that have been painted are those which are displaying the outside world. ...read more.

onto a 2D piece of paper. Also a concern is to work out how best convey its message to its audience. This is the concern of map design. Geradus Mercator was a Flemish cartographer who first presented the idea of an atlas, as we know it today. However, at this time, people were very materialistic and lavishly decorated (works of art) maps were popular to show their wealth. As this atlas was not well decorated, sales were considerably less than expected. But after his death, his atlas was re-designed and sales were boosted. Maths plays a part in Geography as it is the basis of all information gathering. Whether this is in the case of working out the average number of plants per square metre, or how many litres of water flows through a damn per year. ...read more.

Also, geography is important to the success or failure of a battle. The site of the battle is as important as the number of soldiers fighting in it. The Black Prince for instance was well known for picking advantageous battle, which helped give him the reputation of being a great war leader. The most obvious connection to Geography is of course Science. Science interprets why things happen the way they do. The two topics cross over greatly, whether that is on the water cycle, or why it rains where it does and where plants will not grow. This essay highlights just how diverse the subject of Geography really is. It is amazing when you think about it that a subject which is not considered a core subject, could be so far reaching and play such a huge part into how we live our day to day lives. ...read more.