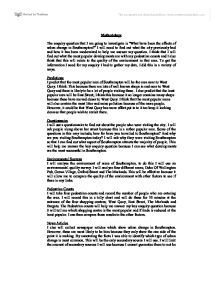 What have been the effects of urban change in Southampton?

The enquiry question that I am going to investigate is “What have been the effects of urban change in Southampton?” I will need to find out what the city previously had and how it has been modernized to help me answer my question. I think that I will find out what the most popular developments are with my pedestrian counts and I also think that this will relate to the quality of the environment in that area. To get the information I need for my enquiry I had to gather my data, I did this in a variety of ways.

I predict that the most popular area of Southampton will be the area near to West Quay. I think. This because there are lots of well known shops in and near to West Quay and there is likely to be a lot of people visiting these. I also predict that the least popular area will be East Street; I think this because it no longer contains many shops because these have moved closer to West Quay. I think that the most popular areas will also contain the most litter and noise pollution because of the more people. However, it could be that West Quay has more effort put in to it too keep it looking clean so that people wish to revisit there.

I will analyse the environment of areas of Southampton, to do this I will use an environmental quality survey. I will analyse four different areas; Duke Of Wellington Pub, Ocean Village, Oxford Street and The Marlands. This will be effective because it will allow me to compare the quality of the environment with other factors to see if there is any links.

I will take four pedestrian counts and record the number of people who are entering the area. I will record this in a tally chart and will do these for 10 minutes at the entrance of the four shopping centres; West Quay, East Street, The Marlands and Bargate. The Pedestrian counts will help me answer my key enquiry question because it will tell me which shopping centre is the most popular and if trade is reduced at the least popular. I can then compare these results to the other factors.

I also will collect newspaper articles which show urban change in Southampton. However, these are most likely to be bias because they only show the one side of the point it is making. By annotating the facts I was able to identify which type of urban change is most common. This will be the only secondary source I will use. I will limit the amount of secondary sources I will use because I cannot guarantee them to not be bias. Therefore, by using mainly primary sources I can guarantee that they are not bias, also that my primary sources show originality.

I will compose a field sketch which shows urban change. For this to show urban change I will need to draw a field sketch of a new building located very close to an old building. An area which shows this is opposite the Duke of Wellington pub. It is show here by the Holiday Inn hotel which is a modern building being located very close to Southampton city walls which were built in 1417.

My data collection may have been effected by anomies and small samples. For example, I only did my pedestrian count for 10 minutes in each area; this is not very effective because in this short time could have had more or less people visiting it than the average amount. To make this more effective I would need to do the pedestrian counts several times at different times of the day so I could find out a more accurate average. If I could alter my data collection methods in anyway I think that I would use Bi Polar graphs to collect my environmental surveys. I think that this would be more effective because it would be easier to record and read. I also had to deal with the problem that all my secondary data could be bias, so I had to think about the other side as well as the side being portrayed. I found it fairly difficult to write down all the buildings use on my transect map. If I could redo this I would note down main buildings so that I knew where I was on the map more. I think that my photos and the field sketch I drew were the most effective pieces of data, as long as they were relevant to urban change, as these showed exactly what was there and had no way of being bias.