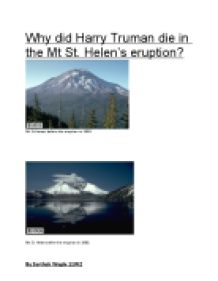 Why did Harry Truman die in the Mt St. Helens eruption?

﻿Why did Harry Truman die in the Mt St. Helen?s eruption? Mt St Helens before the eruption in 1980. Mt St. Helens after the eruption in 1980. Why did Harry Truman die in Mt St Helen?s 1980 eruption? Mount St Helens is a volcanic mountain which is found on the west coast of the United States of America. The USA lies in the continent of North America. Mount Saint Helens can be found on the state of Washington and it is approximately 95 miles south of Seattle (Capital city of the State Washington) and 50 miles (80 km) northeast of Portland, Oregon. Mount Saint Helens lies in the mountain range of Cascades which is mainly made up of volcanic mountains such as Mount st Helens due to the fact that the volcano is located in the Cascade Range and the Cascade Volcanic Arc, a segment of the Pacific Ring of Fire that includes over 160 active volcanoes. This volcano is well known for its ash explosions and pyroclastic flows. Fig 1. A Map of the Cascades mountain range that shows the volcanoes and mountain ranges. ...read more.

On 18th May 1980, an earthquake measuring a magnitude of 5.1 caused a landslide on the northern flank of the volcano. This resulted in the sudden release of pressure that was being held in the crypto dome and a huge eruption occurred in the form of a lateral blast. The Plinian eruption lasted for about 9 hours. Magma comes out as volcanic eruption due to high pressure from the mantle. Pyroclastic flow, lava, ash clouds and lahars come spewing out at the surface of the earth. Fig 4- The destructive plate boundary of Cascades mountain range The oceanic crust sub-ducts underneath the continental crust The oceanic crust melts due to friction from the plates and also from the heat from the mantle. Mount St Helens is the most active volcano of the Cascades Ranges for over 4000 years. In fact it had been dormant for 123 years before the eruption that had taken place in 1980. On 20th March 1980 a series of small earthquakes were detected in the region by a seismometer. This made scientist interested in the activities of the mountain. ...read more.

Flow is controlled by gravity and cascades down the volcanic mountain reaching up to more than 250 mph and more. They may result from the explosive eruption of molten or solid rock fragments, or both depending on the how violent the eruption is. Pyroclastic flows generally follow valleys or other low-lying areas. During the eruption of Mt St Helens, 57 people died from pyroclastic flow. Furthermore when a volcano erupts, a thick cloud is released into the atmosphere. This cloud is known as ash and it is made from fragments of pulverized rocks and minerals along with CO2. When Mt st Helen erupted, an ash column of over 80,000 feat was released. As a result, this ash made roads slippery and reduced visibility, which caused many roads to close, trains were halted and airplanes were stranded. In addition to this, ash fell into lakes and killed all the livestock and it also poisoned the water, making it contaminated with ash and very acidic. The consequences and destruction caused by natural hazards such as volcanic eruption, earthquakes etc. can be categorized into 2 main categories. They are: 1. Primary Effects (effects that is directly caused from the event itself.) 2. Secondary Effects (effects are caused by chains of primary effects.) Some of the secondary effects. ...read more.