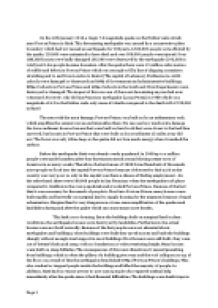 Why did so many people die in the 2010 Haiti earthquake?

﻿On the 12th January 2010, a tragic 7.0 magnitude quake on the Richter scale struck near Port au Prince in Haiti. This devastating earthquake was caused by a conservative plate boundary which had not caused an earthquake for 200years. 3,500,000 people were affected by the quake, 220,000 were estimated to have died, and over 300,000 people were injured. Over 188,383 houses were badly damaged 105,000 were destroyed by the earthquake (293,383 in total) and 1.5m people became homeless. After the quake there were 19 million cubic metres of rubble and debris in Port au Prince which was enough to fill a line of shipping containers stretching end to end from London to Beirut (The capital of Lebanon). Furthermore, 4,000 schools were damaged or destroyed and 60% of Government and administrative buildings, 80% of schools in Port-au-Prince and 60% of schools in the South and West Departments were destroyed or damaged. The impact of this was one of the most devastating anyone had ever witnessed. However, why did San Francisco earthquake (Loma Prieta) in 1980 which was magnitude of 6.9 in the Richter scale only cause 69 deaths compared to the death toll of 220,000 in Haiti? ...read more.

Most houses were self-built- they were out of breeze blocks and scrap, with no foundations or rules restricting height. Many houses were built on steep hillsides. The consequences of this were disastrous. It caused pancaking from buildings, which is when the pillars of a building give away and the roof collapses on top of the floor. As a result of this the earthquake demolished 50% of Port-au-Prince?s buildings. This also crushed or trapped people inside the buildings and killed the majority of people. In addition, Haiti had no rescue service to save some people who required medical help immediately after the quake since it had financial difficulties. The buildings were death traps in Haiti. However in 1913 the U.S.A. introduced life-safe buildings which were designed to save lives during an earthquake. Some of the regulations were that buildings required special emergency doors, which have designed dimensions and special features such as the safety glazing identification requirements for the glass in the building. They also have strong foundations and reinforced pillars to prevent collapsing in an earthquake. An example of a life-safe building is the Transamerica Pyramid. ...read more.

Geologists like Prof. Paul Mann and Dr. Carol Prentice actually predicted this earthquake but the government totally ignored these warnings. This is very sad because Geologists are predicting an earthquake in Haiti again and the government are not preparing or causing any kind of awareness by building buildings with reinforced joints and stronger pillars, which is something very straightforward, and can save thousands of lives. All of the above factors have caused a huge number of life losses in Haiti but the root of the cause is the corruption of the government. The reason why there were so many deaths was the fact that Haiti was not prepared, unlike the U.S.A. and other MEDC?s like Japan, which both suffer frequently from earthquakes. If the government were not corrupt and could rise up and resolve the financial problems in Haiti, there would have been many less casualties as they would have the money to help prepare for an earthquake. All countries who suffer from earthquakes should see Haiti as a lesson to learn from to prevent something like this to happen again. Houses built on marginal land UN troops patrolling the streets. Haiti after the quake The Transamerica pyramid Page ...read more.

An excellent review of the main physical and human factors affecting the impacts of the Haiti earthquake. Very good use of geographical terminology and statistics. Some useful named examples as evidence of points made. To further improve: give sources of data/photos/specific info AND also state the physical data of the USA earthquake too.