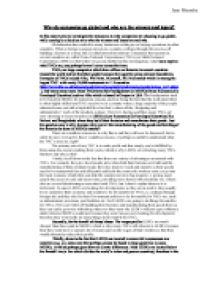 Why do companies go global and who are the winners and losers?

Why do companies go global and who are the winners and losers? In this essay I plan to investigate the reasons as to why companies are choosing to go global, while coming to a decision as to who the winners and losers are and why. Globalisation has resulted in many businesses setting up or buying operations in other countries. When a foreign company invests in a country, perhaps through the process of building a factory or a shop, this is called inward investment. Companies that operate in several countries are called Trans-National Corporations (TNCs) (or Multi-National Corporations (MNCs)). But before we go any further in this investigation, I shall now explain what TNCs are; you perhaps haven't come across that term. TNCs, are large companies which have offices or factories in several countries around the world and are therefore global because they operate across national boundaries. Examples of TNCs include Nike, Wal-Mart, Microsoft, BP, McDonalds which is among the largest TNC- with nearly 30,000 restaurants in 119 countries (http://www.bbc.co.uk/schools/gcsebitesize/geography/globalisation/globalisation_rev3.shtml ), and many many more. Most TNCs have their headquarters in MEDCs (More Economically Developed Countries) such as Nike which is based in Oregon in USA. The headquarters tend to be based in MEDCs for numerous reasons, and one being the fact that the work done there is often highly skilled and TNCs need to be in a country where a large majority of the people educated come out with a high skill level as that's where all the 'designing and administrative' work of the products is done. ...read more.

Lastly, for the benefit of having less environmental or business regulations implied by the government.. In MEDCs, due to them being more developed (therefore producing more pollution through for example, burning immense amounts of fossil fuels) and up to date with human rights, there is only so much pollution you can produce and there is also a certain number of hours one can work for, which is one of the many reasons TNCs don't tend to locate there (in MEDCs) as it simply means one, workers cannot work over time which would decrease profit earned and two, you cant get away with producing a lot of pollution, perhaps through the burning of a lot of fossil fuels in the process of manufacturing goods, which yet again would ultimately decrease profit earned. So that is yet again another reason why LEDCs are attracting more TNCs because in LEDCs there are less or in some places even no government regulations related to pollution or number of hours one can work for, so therefore that would enable the TNCs to do what ever they want as they wont get punished for it. So overall, as you quite clearly can see relocating to a LEDC is much more preferable from a TNC's point of view instead of them staying in a MEDC, as their cost of production is lowered, they get to operate in a place where they are treated well and welcomed, it eases the access to global markets and most importantly increases their profits. ...read more.

Secondly, a lot of minerals are exported. Since TNCs relocate to LEDCs for numerous reasons, one being for the benefit of being closer to raw materials, a lot of minerals will therefore will be extracted and that isn't good as it just reduces the wealth of the LEDC. I say this because a lot of money can be earned when you extract minerals like oil, gold and diamonds, but since LEDCs may not have the best equipment to enable them to do that, they as a result cant, but when they don't extract anything that doesn't harm the LEDC at all as nothing is being extracted, therefore the LEDC is not losing anything. However, when a TNC locates in a LEDC, they on the other hand do extract the minerals, as they have the equipment which enables them to do so, but this isn't too good because it now does harm the LEDC as they are losing their minerals which they can never retrieve, once they are extracted, they are gone forever! But what makes matters even worse now is the fact that the goods the TNCs manufacture in their factories from the minerals extracted, are often of no use or too expensive for people living in the LEDCs, and well, where are the people supposed to get the money to buy the goods from anyway...they don't really earn adequate wages. In conclusion, TNCs without a doubt have all the power as LEDCs are eager and in some sense also desperate for their presence because they will literally give up everything in favour for them, such that TNCs can always get their way regardless of the situation. ...read more.