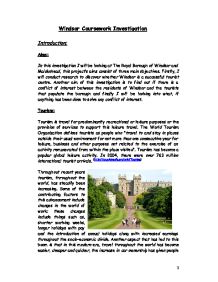 Windsor Coursework Investigation Introduction; Aims: In this investigation I will be looking at The Royal Borough of Windsor and Maidenhead, this project's aims consist of three main objectives. Firstly, I will conduct research to discover whether Windsor is a successful tourist centre. Another aim of this investigation is to find out if there is a conflict of interest between the residents of Windsor and the tourists that populate the borough and finally I will be looking into what, if anything has been done to solve any conflict of interest. Tourism: Tourism is travel for predominantly recreational or leisure purposes or the provision of services to support this leisure travel. The World Tourism Organization defines tourists as people who "travel to and stay in places outside their usual environment for not more than one consecutive year for leisure, business and other purposes not related to the exercise of an activity remunerated from within the place visited". Tourism has become a popular global leisure activity. In 2004, there were over 763 million international tourist arrivals. (http://en.wikipedia.org/wiki/Tourism) Throughout recent years tourism, throughout the world, has steadily been increasing. Some of the contributing factors to this advancement include changes in the world of work; these changes include things such as, shorter working weeks, longer holidays with pay and the introduction of annual holidays along with increased earnings throughout the socio-economic divide. Another aspect that has led to this boom is that in this modern era, travel throughout the world has become easier, cheaper and quicker, the increase in car ownership has given people much greater freedom to choose where and when they go, also before the 1950's air travel was beyond the means of most British families. Since then the use of charter aircraft has reduced fares, and the building of international airports near to large holiday resorts has enabled tourists to travel in larger numbers and greater distances than before. ...read more.

The coach arrived in Windsor at approximately 10.30; we were greeted with a large car park which had clearly been designed for visitors. We were then walked to the river Thames on the way we passed a large open lawn which was designed to give people a place to relax; already I could see that Windsor was very tourist-orientated destination. As we walked we were led into a small square full of souvenir shops, although these shops were not as up market as some we were about to see, they served well as a place to find a bargain. The square was scattered with all sorts of signs directing people around Windsor. The class was taken up a staircase connecting to the bridge that connected with the station; I noticed that there was a lift for elderly and less able people. Once we reached the station Mr. Drummond, our teacher took us for brief tour of the main shopping centre and the surrounding area. As we got closer to the centre of the town it seemed as though the shops kept getting more and more expensive. We then left the shopping centre onto the main road, as Mr. Drummond had expected, we were right on time for the changing of the guards. This is a daily attraction and involves the marching of guards, who are in full uniform with accompanying orchestra, but it also means the closure of some main roads. Like many others, I took my chance to take a picture. As we walked past the castle, I noticed that the castle flag was flying high and proud, signifying the Queen's presence. Once we reached the guild hall, Mr. Drummond told us to look around and try to spot anything out of the ordinary, and to his surprise Ben, a mate of mine, noticed that the pillars were not touching the ceiling. This somewhat ruined Mr. ...read more.

Advantage Card, so that residents can benefit from the tourist attractions, a shopping street for residents only (Peascod St), so that residents don't have to pay ludicrous prices for their goods and finally measures such as more litter bins to reduce the amount of waste the tourists leave behind. My results show that these measures aren't enough and that the residents would like to see some more change. Conclusion Now that I have come to the end of my project, this is what I have discovered about Windsor; o Windsor is indeed a very successful tourist centre, both residents and tourists agree. o The facilities and amenities that Windsor provides are up to, both tourists and residents, satisfaction. o The attractions in Windsor are up to the standards of many tourists and will be able to sustain an income of tourists for the foreseeable future. o That there is in fact a conflict of interest between the tourists and residents, and although the council has taken measures to solve the problem, e.g. the 'Windsor Advantages Card', more could be done. In general all the people I interviewed were happy with Windsor, whether it was an old age pensioner or one of the lads from Eton. But the problems that people were most concerned with did vary from age to age, for example, most young people thought that the attractions could be improved but were satisfied with the amenities, where as the more older population were thrilled by the attractions but not to happy with the state of public toilets. Another thing that I noticed was that most of the female population were not to fussed about the parking issue, but their male counterparts had very strong views on the matter. My predictions at the start of the investigation were confirmed and I had a great time in Windsor and on the whole Windsor is a very successful city; tourists love to visit and residents are proud to live there. ?? ?? ?? ?? 1 ...read more.