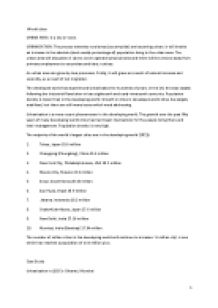 World Cities - notes on the development of Mumbai and other great cities.

﻿World cities URBAN AREA -is a city or town. URBANISATION: The process whereby rural areas (countryside) are becoming urban. It will involve an increase in the absolute (and usually percentage of) population living in the urban area. The urban area will also grow in size to cover a greater physical area and there will be a move away from primary employment to secondary and later, tertiary. An urban area can grow by two processes. Firstly, it will grow as a result of natural increase and secondly, as a result of net migration. The developed world has experienced Urbanisation for hundreds of years. In the UK, this was largely following the Industrial Revolution in late eighteenth and early nineteenth centuries. Population density is lower than in the developing world. Growth in cities in developed world cities has largely stabilised, but there are still many issues which need addressing. Urbanisation is a more recent phenomenon in the developing world. The growth over the past fifty years of many developing world cities has had major implications for the people living there and their management. Population density is very high. The majority of the world's largest cities are in the developing world (2011): 1. Tokyo, Japan 35.6 million 2. Chongqing (Chungking), China 31.4 million 3. New York City, Philadelphia area, USA 30.1 million 4. Mexico City, Mexico 21.5 million 5. Seoul, South Korea 20.15 million 6. Sao Paulo, Brazil 19.9 million 7. Jakarta, Indonesia 18.2 million 8. Osaka-Kobe-Kyoto, Japan 17.6 million 9. New Delhi, India 17.36 million 10. Mumbai, India (Bombay) 17.34 million The number of million cities in the developing world will continue to increase. 'A million city' is one which has reached a population of one million plus. Case Study Urbanisation in LEDC?s- Dharavi, Mumbai Background ? Formally known as Bombay, is India?s largest city with around 14,350,000 people. ? India?s financial centre, a major port and industrial are and the home of the ?Bollywood? film industry and a centre for culture Problems ? Rapid ...read more.

Three main processes 1. GENTRIFICATION-In movement by individuals or groups of people into older housing that was in a state of disrepair and then the improvement of the housing e.g Notting Hill 2. PROPERTY LED REGENERATION SCHEMES- in movement by people as part of a large scale investment programme aimed at urban regeneration in a wider social economic sense e.g London Docklands Development Corporation (LDDC) 3. SUSTAINABLE COMMUNITIES- allowing individuals and communities, who live in the city centre have access to a home, a job and a reliable income, with a reasonable quality of life and opportunities to maximise personal potential through education or health such a GMV(Greenwich Millennium Village) Gentrification ? small scale ? accompanied by landscape and street furniture improvements and higher order shops:- delicatessens wine bars picture galleries ? Bellevue Village, London. Notting Hill Case Study Gentrification-Notting Hill, London what is gentrification ? Gentrification has spread along the northern line in the south of London, e.g. Clapham, Balham and to the north in Notting Hill; here house prices have doubled because it is so commuter friendly. ? In the Victorian times Notting hill was a rough and ?working class? area ? 1950?s there was inner city deprivation ? 1958 influx of Caribbean people ? In the past 30 years there has been gentrification of the area ? Rocketing house prices leading to them being more expensive than the Mayfair area ? Secluded gardens which area desirable for families ? Notting Hill the film ( Hugh Grant) popularised the area ? Famous people like Stella McCartney and Robbie Williams ? However it is not all nice the Trellick tower was built in 1973 is infamous for rape and drug problems ? Built by Hungarian Erno Goldfinger ? There is an area of gentrification next to an area of deprivation ? Nowadays there is extra security, and is a listed building so it is now becoming more trendy Consequences of gentrification Urban decline Characteristics and causes ? High population out-migration figures ? Boarded ...read more.

layout of Curitiba ? The city has changed from being an agricultural area to a more industrial city ? There are still green spaces, ?solution of the parks? By Lerner. ? Flood problems have also been solved by building the parks on the flood plains and making artificial river banks around them this also prevents squatting and slums appearing in the parks Integrated Transport system Buses that move people to and from the city ? There are bus lanes along the main roads ? Red buses- Express with few stops ? Orange buses- outlying settlements into the city ? These buses mean that there is little congestion and more land for development ? The buses are 500 time cheaper than using a car ? Express bus lanes doubles the capacity of people who use the buses ? There are pre-paid bus fares to reduce queuing time and extra wide doors on the buses to let people get on easier ? It has reduced travel times by 1/3 ? The bus drivers are paid in miles covered not by how many people use the line this means all routes are always covered ? Only 10% of low income earners money goes on transport ? Lowest amount of pollution and low consumption of fuel per capita as well ? There is a highly educated workforce which attracted by international business e.g. Volvo Waste management ? Very poor residents, however they can also use the transport system by using the GREEN EXCHANGE, where rubbish is separated and collected and can be exchanged for food or bus tickets, this also allows rubbish collection in slums ? This started in the 1990?s and helps 30,000 families move 300 tonnes of waste each year ? There is a mall in the centre of the city which was made it to pedestrianised streets in under 72 hours to prevent shop owners becoming angry ? This was done by having children painting on the streets to prevent cars and to encouraged families. ...read more.