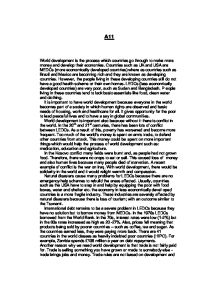 World development is the process which countries go through to make more money and develop their economies. Countries such as UK and USA are MEDCs (more economically developed countries)

World development is the process which countries go through to make more money and develop their economies. Countries such as UK and USA are MEDCs (more economically developed countries) where as countries such as Brazil and Mexico are becoming rich and they are known as developing countries. However, the people living in these developing countries still do not have a good health scheme or their own homes. LEDCs (less economically developed countries) are very poor, such as Sudan and Bangladesh. People living in these countries tend to lack basic essentials like food, clean water and clothing.

It is important to have world development because everyone in the world becomes part of a society in which human rights are observed and basic needs of housing, work and healthcare for all. It gives opportunity for the poor to lead peaceful lives and to have a say in global communities.

World development is important also because without it there is conflict in the world. In the 20th and 21st centuries, there has been lots of conflict between LEDCs. As a result of this, poverty has worsened and become more frequent. Too much of the world’s money is spent on arms trade, to defend other countries from attack. This money could be spent on more important things which would help the process of world development such as: medication, education and agriculture.

In the Kosovo conflict many fields were burnt and, as people had not grown food. Therefore, there were no crops to eat or sell. This caused loss of money and also human lives because many people died of starvation. A recent example of conflict is the war on Iraq. With world development, there would be solidarity in the world and it would relight warmth and compassion.

Natural disasters cause many problems for LEDCs because there are no emergency help schemes to rebuild the areas affected. Usually, countries such as the USA have to step in and help by equipping the poor with food boxes, water and shelter etc. the economy in less economically developed countries is a more fragile industry. These industries are severely affected by natural disasters because there is loss of tourism; with an outcome similar to the Tsunami.

International debt remains to be a severe problem in LEDCs because they have no solution but to borrow money from MEDCs. In the 1970s LEDCs borrowed from the World Bank. In the 70s, interest rates were low (1-2%) but in the 80s rates increased as high as 20-27%. Also, prices fell meaning that products being sold by poorer countries – such as coffee, tea and sugar. As the countries earned less, they were paying more back. There are 41 countries in the world classes as heavily indebted poor countries (HIPC). For example, Zambia spends £106 million a year on debt repayments.

Another reason why we need world development is that trade is not fairly paid for. Trade is selling something you have grown or made to somebody else- trade brings jobs and money. Trade rules are not based on development and they help MEDCs more. Goods can move freely through countries subsidised industries so that goods can be produced more cheaply. Mexico, signed the North America Trade Agreement which meant that Mexico and America can trade freely. US maize is now sold at such a cheap price that Mexican farmers are not paid enough to live on. Fair trade has been introduced. This means that by paying a few pence more for chocolate, coffee etc then you can increase the farmer’s wage who harvested it.