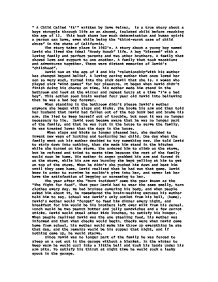 &quot; A Child Called 'it'&quot; written by Dave Pelzer, is a true story about a boys struggle through life as an abused, isolated child before reaching the age of 12.

" A Child Called 'it'" written by Dave Pelzer, is a true story about a boys struggle through life as an abused, isolated child before reaching the age of 12. This book shows how much determination and human spirit a person can have, even while being the "third-worst case of child abuse" in the state of California. The story takes place in 1960's. A story about a young boy named David who lived the ideal "Brady Bunch" life. A boy "blessed" with a loving family and perfect parents and two other brothers. A family that showed love and support to one another. A family that took vacations and adventures together. These were distant memories of David's "childhood". David now at the age of 4 and his "relationship"with his mother has changed beyond belief. A loving caring mother that once loved her son so very much, turned into the sick devil that she is. A woman who played sick "mind games" for her pleasure. It began when David didn't finish doing his chores on time, his mother made him stand in the bathroom and look at the mirror and repeat hours at a time "I'm a bad boy". ...read more.

In the winter to keep warm he would curl into a little ball and tuck his hands under his arm pits. To satisfy his thirst at night time he would suck a leaky spout in the garage. Other "games" that David's mother would do is, the gas chamber, where she would put a mixture of amonia and Clorox in a bucket and then lock David in the bathroom for several hours at a time. She made him lye in a bathtub of freezing cold water for hours and then make him sleep outside in the garage. She made him swallow amonia until he passed out. The year before David's 11th birthday, while he was cleaning the dishes, his mother threatened him that if he didn't hurry up that she would kill him. She picked up a knife like she usually did, but by "accident she tripped while walking away and the knife flew out of his sight and before he knew what happened he fell to the floor and passed out. Waking up on the toilet, he found his mother cleaning his stab wound. ...read more.

He's served nine years in the Armed Forces, got married, and now has a son. Both of Dave's parents have passed away. He look's at his mother's life as a tragedy, and finds that he learned the absolute power of forgiveness from all he endured as a young boy. Dave believes, "it's always the smallest thing that makes a world of difference, the things that unfortunately we take for granted. When you almost die, you take nothing for granted...and that's the glory of life. Dave's latest book A Man named Dave completes the trilogy of his life story. The book begins from the end of Pelzer's struggle with child abuse. He then back tracks and tells his story. His mother, once a sweet and caring person, suddenly turns against Pelzer and becomes very abusive, but only to Pelzer and not his other brothers. Her abuse towards him becomes a charade of games, where she purely tortures him, sometimes to the point where one wonders how he was still alive. Although the book mainly focuses on the abuse Pelzer endures, the story explains his motivation and will to survive and defeat his mother. The story is very easy to read because it was developed from a child's viewpoint. But in no way does this detract the quality of the book. ...read more.