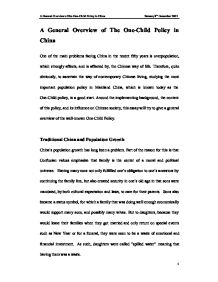 A General Overview of The One-Child Policy in China

A General Overview of The One-Child Policy in China One of the main problems facing China in the recent fifty years is overpopulation, which strongly affects, and is affected by, the Chinese way of life. Therefore, quite obviously, to ascertain the way of contemporary Chinese living, studying the most important population policy in Mainland China, which is known today as the One-Child policy, is a good start. Around the implementing background, the content of this policy, and its influence on Chinese society, this essay will try to give a general overview of the well-known One-Child Policy. Traditional China and Population Growth China's population growth has long been a problem. Part of the reason for this is that Confucian values emphasize that family is the center of a moral and political universe. Having many sons not only fulfilled one's obligation to one's ancestors by continuing the family line, but also created security in one's old age in that sons were mandated, by both cultural expectation and laws, to care for their parents. Sons also became a status symbol, for which a family that was doing well enough economically would support many sons, and possibly many wives. ...read more.

So, definitely, it did successfully achieve its primary purpose. However, it also has brought so many positive and negative influences, which probably are beyond the expectation of the government that established it twenty years ago. This will be explained from two aspects below. I. What happens when the families comply with the One-Child Policy? Most couples comply with the One-Child policy according to the law. A lighter family burden certainly means higher living standards. Also, education is very expensive in China. Especially in the countryside, the school fees has risen rapidly-representing around 27% of the total budget of an average family with just one child. (http://news.bbc.co.uk/2/hi/asia-pacific/941511.stm) Therefore, the one-child policy allows families to concentrate their resources on one child, thus leading to higher standards of education. Furthermore, it can be argued that it is the One-Child policy that has promoted women's liberation in China. This point of view can be seen from two aspects-both the mother and the daughter. Because of the reduction in the number of children from even as much as eight to only one, women, especially urban women, are now able to concentrate on their careers instead of raising lots of children. ...read more.

Appendix: According to the One-Child Policy of China, the couple will be allowed to a second child if one of the below criteria is met: a. The first child dies; b. The first child is severely handicapped and he or she will not be able to help take care of his or her parents in old age; c. They have twins or triplets (resulting in all kinds of Chinese and "Western" medicines are sold to try to increase the odds of this); d. A couple divorces and a new spouse has no children; e. Parents in rural areas are allowed to have two children provided the first is a girl; f. Both parents are only children, they are allowed to have more than one child provided the children are spaced more than four years apart; g. Ethnic minorities are allowed to have two children on the grounds that there are so few of them that reducing their numbers would mean their eventual disappearance. (Ironically, this is likely to lead to their disappearance in a different way - Han Chinese, which is the main ethnic group in China, are so anxious to have more than one child that marrying an ethnic minority is beginning to be seen as an easy way to get around the one-child policy. As a result, intermarriage is likely to assimilate the minorities into the larger population.) (http://www.lfc.edu/~moskowitz/courses/lectures/onechild.hf. ...read more.