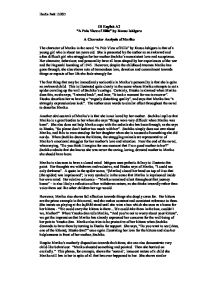 IB English A2 "A Pale View of Hills" by Kazuo Ishiguro A Character Analysis of Mariko The character of Mariko in the novel "A Pale View of Hills" by Kazuo Ishiguro is that of a young girl who is about ten years old. She is presented by the author as an awkward and often difficult girl who struggles for her mother Sachiko's nonexistent love and acceptance. Her character, behaviour, and personality have all been shaped by her experiences of the war and the Nagasaki bombing of 1945. However, despite the childhood traumas Mariko has gone through, she also shows acts of tremendous love, devotion and commitment towards things or aspects of her life she feels strongly for. The first thing that may be immediately noticeable in Mariko's personality is that she is quite an awkward child. This is illustrated quite clearly in the scene where Mariko attempts to eat a spider crawling up the wall of Sachiko's cottage. ...read more.

Sachiko admits that she knows she was never the caring, loving, devoted mother to Mariko she should have been. Mariko is also seen to have a closed mind. Ishiguro uses pathetic fallacy to illustrate this point. Her thoughts are withdrawn and reclusive, and Etsuko says of Mariko, "I could see only darkness". A quote in the spider scene, "[Mariko] closed her hand on top of it so that [the spider] was imprisoned", is very symbolic in the sense that Mariko is imprisoned inside her own mind. Her relative reticence - "Mariko remained silent throughout that journey home" - is also likely a reflection of her withdrawn nature, as she thinks inwardly rather than voice them out like other children her age would. However, Mariko also shows full affection towards things she deeply cares for. Her kittens are the prime example in this novel, and she makes constant and consistent reference to them. ...read more.

She shows similar behaviour in another section of the novel, when she "ran a little way ahead, then waited for us to catch up." Her naivety is shown also when she is oblivious of a woman staring at her from the train platform. "Mariko continued to look out of the window, quite unaware of the woman." Her enthusiasm when looking through her binoculars, "Mariko seemed to be testing the effectiveness of her binoculars, holding them to her eyes one moment, taking them away the next" is also a good example of when Mariko is still very much a child. For most of the novel "A Pale View of Hills", Mariko is presented as a young girl who has a hard time in communicating and socialising. She is often awkward, and clearly does not receive the amount of love she should be receiving from her mother. However, she also does display qualities that prove she would be a much better mother than Sachiko herself, and even hints that she would be an even better child than she is for most of the novel. 850 words Heidie Park 12HS3 ...read more.