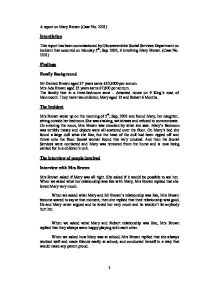 A report on Mary Brown.

A report on Mary Brown (Case No. 1221) Interdiction This report has been commissioned by Gloucestershire Social Services Department on incident that occurred on Monday 5th, Sep. 2001, it involving Mary Brown. (Case No. 1221) Findings Family Background Mr Derrick Brown aged 37 years earns �10,3000 per annum. Mrs Ada Brown aged 35 years earns �7,800 per annum. The family live in a three-bedroom semi - detached house on 9 King's road of Monmouth. They have two children; Mary aged 12 and Robert 6 Months. The Incident Mrs Brown woke up on the morning of 5th, Sep, 2001 and found Mary, her daughter, sitting outside her bedroom. She was shaking, withdraws and refused to communicate. On entering the room, Mrs Brown was shocked by what she saw. Mary's Bedroom was terribly messy and objects were all scattered over the floor. On Mary's bed she found a large doll what she like, but the head of the doll had been ripped off and throw onto the floor. Social worker found this very unusual. And then the Social Services were contacted and Mary was removed from the home and is now being carried for in a children's unit. ...read more.

Conclusion From the evidence gathered in the interviews it would seem that ever since Robert was born, Mary has been jealous of him as he was getting more attention from Mr and Mrs Brown, as he is younger. From the evidence gathered in the interviews it would seem that there was something happened between Mr Brown and Mary. Mary is scare of her father, and Mr Brown cannot control himself when he got drunk. According to Mary trashed her room and ripped of the head of the doll, it seems that she wants to tell us has something happen to her. Maybe she wanted to notice that she abused by her dad, or she done all things like these to symbolise the lack attention by her parent. However, all of these no enough to say that is true, so we need to have an advance investigation for this case. Recommendations From what has happened to Mary it has been decided that the best solution is to let her carried for in a children's unit now, and she must attend counselling classes to help her with her feelings in these few weeks. After two weeks we must let her go home, and let her family to support to her. 1 ...read more.