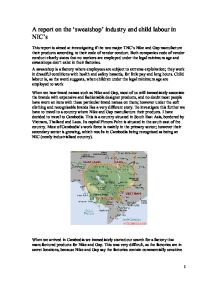 A report on the 'sweatshop' industry and child labour in NIC's.

A report on the 'sweatshop' industry and child labour in NIC's This report is aimed at investigating if the two major TNC's Nike and Gap manufacture their products according to their code of vendor conduct. Both companies code of vendor conduct clearly states that no workers are employed under the legal minimum age and sweatshops don't exist in their factories. A sweatshop is a factory where employees are subject to extreme exploitation; they work in dreadful conditions with health and safety hazards, for little pay and long hours. Child labour is, as the word suggests, when children under the legal minimum age are employed to work When we hear brand names such as Nike and Gap, most of us will immediately associate the brands with expensive and fashionable designer products, and no doubt most people have worn an item with these particular brand names on them; however under the soft clothing and recognisable brands lies a very different story. To investigate this further we have to travel to a country where Nike and Gap manufacture their products. I have decided to travel to Cambodia. This is a country situated in South East Asia, bordered by Vietnam, Thailand and Laos. Its capital Phnom Pehn is situated in the south east of the country. Most of Cambodia's work force is mainly in the primary sector; however their secondary sector is growing, which results in Cambodia being recognised as being an NIC (newly industrialised country). ...read more.

They informed us about some young girls who were only 12-13 years old. We then agreed that they would arrange a meeting with the young girls. When we met these young girls they told us, that they had lied about their age to get the job, because they were from very poor backgrounds and left their homes and families to earn money to send home to their families. They said they have no choice but to work in such bad conditions, as their families cannot afford to send them to school to have a decent education. We then decided to send a hidden camera inside the factory to gather some more evidence. A worker was given a hidden camera, which was put into his bag. When he came out from the factory an hour or so later, we saw the horrible things that were happening inside the factory. Workers were verbally insulted, physically and psychologically abused. Now it was time for us to confront Nike and Gap with all the evidence that we had gathered. When we confronted Nike's spokesman with this evidence he replied "unfortunately we've found on occasion in different places isolated instances of child labour and sweatshops which I would say is isolated". But I am sure this is not an isolated incidence. I think if we went to any other factories, which manufacture products for Nike and Gap we would find the same evidence. ...read more.

But instead Nike and Gap spent an enormous amount of their revenues on sponsoring celebrities such as the Brazilian football team. It breaks my heart to see them suffer like that and nobody is doing anything about it. I am very disappointed with the companies like Nike and Gap, who do not feel one bit guilty for what they are doing. Workers are dying because of exhaustion and stress. If their shoes were not so comfortable, I wouldn't even buy Nike. But, I guess that's how people see it - the only thing that matters is that they are good looking and that they are comfortable. The clothes we buy from the Gap and Nike are made in factories in South Asia and the demand here affects lives there. Consumers are starting to realise this. More and more want that workers making their clothes are being treated humanely. Both the Gap and Nike have anti-sweatshop rules or codes of vendor conduct, they proudly post those reassurances on their web sites and staff repeats to worried customers "No sweatshops, no child labour, no tolerance". But as we have seen in this report Nike and Gap break their codes of vendor conduct on several points. These codes of vendor conduct and anti-sweatshop rules are just an attempt not to damage their reputation. After all Nike and Gap rely on their reputation from the public and a report like this could damage their reputation. I hope that this report has helped to raise awareness about these issues. 1 ...read more.