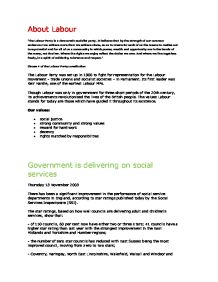 About Labour 'The Labour Party is a democratic socialist party. It believes that by the strength of our common endeavour we achieve more than we achieve alone, so as to create for each of us the means to realise our true potential and for all of us a community in which power, wealth and opportunity are in the hands of the many, not the few. Where the rights we enjoy reflect the duties we owe. And where we live together, freely, in a spirit of solidarity, tolerance and respect.' Clause 4 of the Labour Party constitution The Labour Party was set up in 1900 to fight for representation for the Labour movement - trade unions and socialist societies - in Parliament. Its first leader was Keir Hardie, one of the earliest Labour MPs. Though Labour was only in government for three short periods of the 20th century, its achievements revolutionised the lives of the British people. The values Labour stands for today are those which have guided it throughout its existence. ...read more.

Secondly the money released by the tough decision on free personal care for the elderly better off is being used to enable far more older people to stay in their own homes which is what they want." Acting Chief Inspector of Social Services Averil Nottage said: "I am delighted that the social services star ratings published today show a significant improvement in performance over the last year. Services for both adults and children are getting better. I would like to congratulate staff at all levels in the 41 councils that have moved to a higher star rating and particularly those who have moved from zero stars. Social services often get criticised. Today we should celebrate the achievements of social services" Welcoming the star ratings Health Minister Stephen Ladyman said: "Star ratings are driving improvements in social services. Those who have criticised star ratings and performance indicators should accept they were wrong. SSI's inspection process is helping councils to identify problems and put things right. ...read more.

They confirm the sense that directors had, even when last year's stars were awarded, that improvements in performance were very much in the pipeline. They demonstrate very much the improvements that have been made. "It's important to remember that behind each of these ratings lie cared-for families, protected children, elderly or disabled or mentally ill people who have had the care and services which they are entitled to, and which our care workers and managers provide with such dedication and skill. "Today's figures are a pat on the back for social services, social care workers and the people we serve. Nothing should detract from the sense of pride we should feel at the improvements they've revealed." Sir Jeremy Beecham, chair of the Local Government Association, said: "The latest star ratings for social services show a consistent, objective improvement in personal social services to adults and children. But this is no time for complacency - there is still much work to be done to maintain the momentum of this improvement and see through the changes resulting from the Climbi� enquiry and the Children's Green Paper." ...read more.