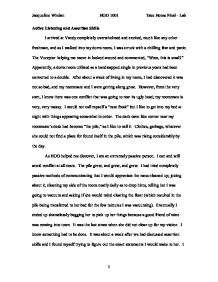 Active Listening and Assertion Skills I arrived at Vandy completely overwhelmed and excited, much like any other freshman, and as I walked into my dorm room, I was struck with a chilling fear and panic. The Vuceptor helping me move in looked around and commented, "Wow, this is small." Apparently, a dorm room utilized as a handicapped single in previous years had been converted to a double. After about a week of living in my room, I had discovered it was not so bad, and my roommate and I were getting along great. However, from the very start, I knew there was one conflict that was going to rear its ugly head; my roommate is very, very messy. I would not call myself a "neat freak" but I like to get into my bed at night with things appearing somewhat in order. The dark cave-like corner near my roommate's desk had become "the pile," as I like to call it. Clothes, garbage, whatever she could not find a place for found itself in the pile, which was rising considerably by the day. As HOD helped me discover, I am an extremely passive person. I can and will avoid conflict at all costs. The pile grew, and grew, and grew. I had tried completely passive methods of communicating that I would appreciate the mess cleaned up; joking about it, cleaning my side of the room nearly daily as to drop hints, telling her I was going to vacuum and asking if she would mind clearing the floor (which resulted in the pile being transferred to her bed for the few minutes I was vacuuming). Eventually I ended up shamelessly begging her to pick up her things because a good friend of mine was coming into town. It was the last straw when she did not clean up for my visitor. I knew something had to be done. ...read more.

Surprisingly my parents were very receptive. They let me know that some of their lack of understanding had come from me not expressing my feelings clearly and that what I perceived as there insensitivity was actually just parental instinct and fear for my safety. I made it clear that I was not criticizing their parenting but just felt that change was necessary. The change was implemented and now I have nearly complete reign on my time of return when I am at home. Growth and Development The one thing that has changed most dramatically and is most obvious to me since arriving at Vanderbilt is the complete shift in my identity status. Back at home I resided somewhere between foreclosure and diffusion, content in my rigorous coursework and extracurriculars that took up nearly all my time. I had decided to go into business, much like my father who constantly suggested that I would excel in the field, and making changes to the structure my life was in never occurred to me. Because Vanderbilt did not offer a business major and I really enjoy working with others I decided to major in HOD. I took an Economics class and a Spanish class to satisfy some requirements but found myself completely fascinated. I completely shifted gears and realized that maybe I would end up in the business field but more likely on the consulting end. I now have decided completely on my own and because of my passion for it that I will likely double major in HOD and Economics with a minor in Spanish. Four months ago, this never ever would have occurred to me. My career interests seemed to skip right over the moratorium stage and move on to achievement as I find myself very happy with my own choices and invested in these pursuits. Career Weekly magazine suggests, "Understanding your own desires is important because your career won't just be the source of your income... ...read more.

Relating to my family and home life is my spirituality and relationship with God, which has been constantly in question for me during this transitional period in my life. I was raised in a strict Catholic environment and was a faithful churchgoer and youth leader in my church community. Since arriving at school, I have only attended church a few times and I have found that my relationship with God was not as strong as I had originally thought. One of my goals for personal improvement was integrating spirituality into my life. I chose this goal because I had never been fully satisfied with my faith. I have always been able to turn to God and I enjoy that stability, however, I believe that becoming more spiritual overall would be more beneficial to me than trying to continue practicing my sometimes overwhelming faith. In pursuing this goal, I have found myself reflecting more, on both values and morals. As an inspiration to explore my faith I have been reading excerpts from the Bible and have started a journal of biblical quotes that I find meaningful and applicable to my life. Especially inspirational is a quote found in Matthew 14:31, "You of little faith,' he said, 'why did you doubt?'" I often doubt myself and this quote made me realize that faith and spirituality could help me to be surer of myself. I have been praying more, and for me prayer allows me to turn over in my head ideas and actions that I might have otherwise overlooked as troubling me. A side effect of my increased spirituality has been finding more good in people than previously. I think that exposure to the idea of spirituality in some of the HOD lectures and discussions led to me the fact that it really is an important part of who I am. I hope to continue to explore my faith and practice religion while at the same time focusing a lot more on spiritual experiences and spiritual growth in others and myself. Jacqueline Whelan HOD 1001 Take Home Final - Lab 1 ...read more.