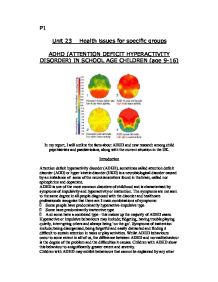 P1 Unit 23 Health issues for specific groups ADHD (ATTENTION DEFICIT HYPERACTIVITY DISORDER) IN SCHOOL AGE CHILDREN (age 9-16) In my report, I will outline the facts about ADHD and new research among child psychiatrists and paediatricians, along with the current situation in the UK. Introduction Attention deficit hyperactivity disorder (ADHD), sometimes called attention deficit disorder (ADD) or hyper kinetic disorder (HKD) is a neurobiological disorder caused by an imbalance of some of the neurotransmitters found in the brain, called nor epinephrine and dopamine. ADHD is one of the most common disorders of childhood and is characterised by symptoms of impulsivity and hyperactivity or inattention. The symptoms are not seen to the same degree in all people diagnosed with the disorder and healthcare professionals recognise that there are 3 main combinations of symptoms: * Some people have predominantly hyperactive-impulsive type * Some have predominantly inattentive type * And some have a combined type - this makes up the majority of ADHD cases. Hyperactive or impulsive behaviours may include; fidgeting, having trouble playing quietly, interrupting others and always being 'on the go'. Symptoms of inattention include; being disorganised, being forgetful and easily distracted and finding it difficult to sustain attention in tasks or play activities. Whilst ADHD behaviours occur to some extent in all of us, the difference between ADHD and normal behaviour is the degree of the problem and the difficulties it causes. Children with ADHD show this behaviour to a significantly greater extent and severity. Children with ADHD may exhibit behaviours that cannot be explained by any other P2 Psychiatric condition and are not in keeping with the child's age and intellectual ability. Mood swings and social clumsiness are common. Parents and teachers may report that these children often misread the accepted social cues, saying or doing inappropriate things, Social problems often hit peak in primary school and start to ease in secondary school. ...read more.

P6 Treatment and a way forward for children ADHD is not simply about diagnosing the disorder and treating it with a single, or combined, therapy. The nature of the disorder, whether undiagnosed and untreated or recognised and managed by health services, requires greater input from a range of different sources to ensure continued support. The most critical points for a child are: * Parents and the family network * Education and schooling * Social services and, where appropriate, the youth and criminal justice system. Every individual must be given the opportunity to achieve his or her potential in learning and educational systems. For this to happen it is important that pupils with ADHD are identified as early as possible in their schooling so that they receive appropriate support. Increased understanding of ADHD, plus help negotiating the routes through the statementing and diagnosis process for both parents and teachers, is essential to aid children with ADHD in receiving the educational support they need. This requires more effective joined up working - with guidance and advice between all the parties involved. The DfES (department for education and skills) has recently produced guidance in the form of a Special Educational Needs (SEN) Code of Practice in order to try to improve the support provided to children with SEN within the education system. The Code states that Local Educational Authorities are required to build collaborative relationships with health services, parent groups, social services and voluntary organisations, utilising joined up working between agencies to ensure provision of integrated care for children with mental health problems. The DfES provides guidelines for schools, but these policies do not translate into reality in practice. ADHD is a complex disorder and the lack of understanding around ADHD means that teachers would benefit from policies that provide more clear and definite guidance regarding ADHD in the classroom. Only then will the joined up thinking of the DfES promotes be translated into effective joined up working. ...read more.

This was designed to attract the attention of the parents and teaching staff to make them aware of all the facts on ADHD. The leaflet is not too long consisting of just three pages, so it should not be too boring or feel that the topic is dragging on and on. There is also a list of website addresses should the parent wish to investigate further. The leaflet that I have designed is a quick way to get information across to parents and is designed to grab their attention. It also provides the parents with enough basic information to encourage them to ask for more and can also become a catalyst for discussion when they are handed out personally. The front cover of my leaflet has to work like the headline of an advertisement, so it was designed to tell the world what information they need to be aware of and help that may be on offer. The leaflet may also end up being read by many more people than the person it was handed to, widening its impact still further. I also believe that the leaflet is persuasive, interesting to read and catchy and memorable. By using bullet points it makes the leaflet easier to read. The cartoon pictures help to get my message across as it is the first thing that will catch a person's eye and is also attractive and stands out, enticing people to pick it up. It is easy to use so that people are guided through it without confusion about which section they should read, or look at, next. Rationale The rationale for the leaflet was that parents are regarded as the fundamental principle underpinning the successful treatment and care of their children who may suffer from ADHD. It aims to be a common point of reference for information and includes basic advice for parents and how they can help their children. The leaflet provides answers to some of the most common questions and where to get help. By Dawn Bewick ?? ?? ?? ?? ...read more.