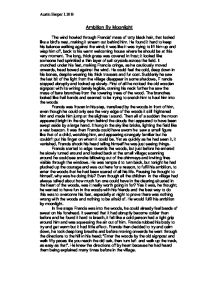 Ambition By Moonlight The wind howled through Francis' mass of tatty black hair, that looked like a bird's nest, making it stream out behind him. He found it hard to keep his balance walking against the wind; it was like it was trying to lift him up and wisp him off, back to his warm welcoming house where he should be at this very moment. The long, thick grass was covered in frost; it looked like someone had sprinkled a thin layer of salt crystals across the field. It crunched under his feet, making Francis cringe, as he cautiously moved onwards, head bowed against the wind. He could feel the cold, deep down in his bones, despite wearing his thick trousers and fur coat. Suddenly he saw the last bit of the light from the village disappear in some shadows, Francis stopped abruptly and looked up slowly. First of all he noticed the old wooden signpost with its writing barely legible, craning his neck further he saw the mass of bare branches from the towering trees of the wood. The branches looked like frail hands and seemed to be trying to snatch him to haul him into the woods Francis was frozen in his step, transfixed by the woods in front of him, even though he could only see the very edge of the woods it still frightened him and made him jump at the slightest sound. ...read more.

his head; "Enter the woods by the old signpost and walk fifty paces tile you reach the old oak, then turn left and walk up the track, as easy as that". He knew the directions off by heart because he had heard them being explained many times before in the village. As he progressed into the woods the moonlight was diminishing as the moon was only able to break through the dense branches in a few areas. Every step he took, twigs cracked under his feet sounding like whip cracks. Subsequently the wind picked up, making the decaying leaves swirl up around him, like a graceful ballet dancer. Then the trees alongside him began to creak, a slow rhythmic pattern that made him stand bolt upright and he could feel a prickling sensation all over his body as if he was being poked by little pins. Francis was now feeling very uncomfortable and frightened so he quickened his pace of walking to a brisk stride. Francis had now lost count of his steps but knew the old oak must be near. As he brushed a branch out of his path he saw it; there was a very small clearing and in the middle stood a huge oak tree, it loomed up in front of him, it's roots looked like a mass of snakes and from the roots sprouted a hefty trunk that, on closer inspection, had something that looked like slashes on it. ...read more.

The child took a step towards him and Francis then noticed that the child was very pale, like a ghost and when Francis scanned around he noticed that so were the other children, were they ghosts? Francis gulped and spoke to them through a fear that was paralysing him, "What are you?" The child let out a laugh that was very flat and dead, then the child pulled a knife from his fur coat. Francis may have fulfilled his ambition but now he had a new one, to live. Scrambling up he tried to run back but collided with the old oak and fell to the floor; the child was now on top of him with the knife above his head, he let out that awful laugh again and just as Francis was about to scream the child dropped the knife on the floor and pulled a wig off his head, which as it brushed passed the child's face took some white powder with it. The child turned round laughing and all the other children started giggling and mocking Francis. Francis recognised them now, they were all children from the village and had come out here to play a practical joke on him. He got up and walked off leaving the laughter behind him saying to himself in a low whisper, " They may mock me now, but they will grow to respect me as I have fulfilled my ambition". Austin Harper L10 B ...read more.