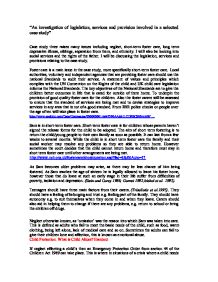 &quot;An investigation of legislation, services and provision involved in a selected case study&quot;.

"An investigation of legislation, services and provision involved in a selected case study" Case study three raises many issues including neglect, short-term foster care, long term depressive illness, siblings, separation from them, and ethnicity. I will also be looking into social services and the rights of the father. I will be discussing the legislation, services and provisions relating to the case study. Foster care is a main issue in the case study, more specifically short-term foster care. Local authorities, voluntary and independent agencies that are providing foster care should use the national Standards to audit their service. A statement of values and principles which complies with the UN Convention on the Rights of the child and UK child care legislation informs the National Standards. The key objectives of the National Standards are to give the children better outcomes in life that is cared for outside of there home. To underpin the provision of good quality foster care for the children. Also the foster carers will be assessed to ensure that the standard of services are being met and to devise strategies to improve services in any area that is not of a good standard. From 2001 police checks on people over the age of ten will take place in foster care. http://www.epolitix.com/Data/Companies/000000001A447390AA6611CD9BC800AA00'.... Sam is in short-term foster care. Short-term foster care is for children whose parents haven't signed the release forms for the child to be adopted. ...read more.

The Police and Criminal Evidence Act 1984 restates the common law power of the police to enter and search any premises for the purpose of saving 'life or limb'. Over the last 30 years Britain consists of arrangements and agencies that help with suspected family abuse. Law gives local authorities the primary role for taking action, however they should be in close contact with the health profession and other professionals. Article 19, The Convention on the Rights of the Child says "State parties shall take all appropriate legislative, administrative, social and educational measures to protect the child from all forms of physical or mental violence, injury or abuse, neglect or negligent treatment, maltreatment or exploitation, including sexual abuse, while in the care of parent (s), legal guardian (s) or any other person who has care of the child." Hill, M ; Tisdall, K.(1997) Children & Society. Longman. London. Sam's mother is suffering from a long-term depressive illness. The World Health Organisation refers to health as "a state of complete physical, mental and social well-being and not merely the absence of disease or infirmity." (Downie et al. 1990). His mother's long-term depressive illness could relate to Sam's neglect. Poverty may be an issue arising from this. In the case study there is no mention of Sam's biological father, therefore his mother may have been finding it hard to work and look after Sam at the same time. Poverty produces stress and which causes frustration and then leads onto violence or in Sam's case neglect. ...read more.

The Children In Need survey shows that the population of ethnic minority groups in care is 16%-18%, which is higher than the ethnic minority group population of 9%-11%. There is a shortage of ethnic minority adopters, therefore results in a limitation of options for children out of care. A reduction in suitable carers could be due to ethnic minority groups having additional needs that the local authorities have to provide for. There have been a number of publications that illustrated the fact that there is an additional need of foster care for ethnic minority children. It was discovered that the local authorities did not meet these needs. This could be a reason in which Sam did not stay in his foster care for a long period of time. The Social Services Inspectorate Report "Fostering for the Future" stated "Worryingly, most of the councils, with one notable exception, were not recruiting sufficient numbers of carers from black and minority ethnic communities". White paper, "Adoption: A New Approach", DoH, December 2002 looked at much of the available literature on looked after children. Part of it's summary showed that the adoption rates of white and non-white children showed a big difference. 17% of children in care being from an ethnic minority group but only 10% of these children were adopted. http://www.brent.gov.uk/Finance.nsf/24878f4b00d4f0f68025663c006c7944/5b60c298398... Another issue that may arise due to Sam's mixed race could be emotional problems such as prejudice from other children or adults. If he is fostered with carers of a white background he may not look at them as a positive role models. ...read more.