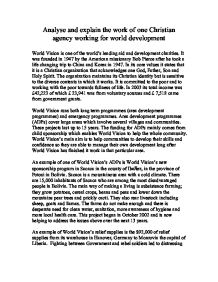 Analyse and explain the work of one Christian agency working for world development World Vision is one of the world's leading aid and development charities. It was founded in 1947 by the American missionary Bob Pierce after he took a life changing trip to China and Korea in 1947. In its core values it states that it is a Christian organization that acknowledges one God, Father, Son and Holy Spirit. The organization maintains its Christian identity but is sensitive to the diverse contexts in which it works. It is committed to the poor and to working with the poor towards fullness of life. ...read more.

World Vision's main aim is to help communities to develop their skills and confidence so they are able to manage their own development long after World Vision has finished it work in that particular area. An example of one of World Vision's ADPs is World Vision's new sponsorship program in Sacaca in the county of Iba�ez, in the province of Potosi in Bolivia. Sacaca is a mountainous area with a cold climate. There are 15,000 inhabitants of Sacaca who are among the most disadvantaged people in Bolivia. The main way of making a living is subsistence farming; they grow potatoes, cereal crops, beans and peas and lower down the mountains pear trees and prickly cacti. ...read more.

Fighting between Government and rebel soldiers led to distressing circumstances after the US had withdrawn from the country. World Vision responded by sending this relief. World Vision's aim is to help the neediest of people regardless of religion or race. They give priority to people before money, structure, systems and institutions. It does this daily by working with the world's poorest people to meet their individual needs, one by one, starting with the neediest. World Vision, like most aid charities, relies on donations. Unlike some, it also relies on sponsorship of children. It is a remarkable charity that works hard to help people in developing countries. In my view it achieves its aims with the resources that are available to it. ...read more.