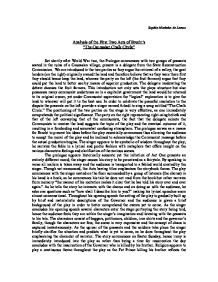 Analysis of the First Two Acts of Brecht's

Sophia Marinho de Lemos Analysis of the First Two Acts of Brecht's "The Caucasian Chalk Circle" Set shortly after World War two, the Prologue commences with two groups of peasants seated in the ruins of a Caucasian village, present is a delegate from the State Reconstruction Commission. We are introduced to the two parties as they argue the retrieval of a valley; the goat herders (on the right) originally owned the land and therefore believe that as they were there first they should hence keep the land, whereas the party on the left (the fruit farmers) argue that they could put the land to better use by means of superior production. The delegate moderating the debate chooses the fruit farmers. This introduction not only sets the plays structure but also possesses many communist undertones as in a capitalist government the land would be returned to its original owner, yet under Communist supervision the "logical" explanation is to give the land to whoever will put it to the best use. In order to celebrate the peaceful resolution to the dispute the peasants on the left provide a singer named Arkadi to sing a song entitled "The Chalk Circle." The positioning of the two parties on the stage is very effective, as one immediately comprehends the political significance. The party on the right representing right-wing beliefs and that of the left conveying that of the communists, the fact that the delegate selects the Communists to receive the land suggests the topic of the play and the eventual outcome of it, resulting in a foreboding and somewhat confusing atmosphere. The prologue serves as a means for Brecht to present his ideas before the play essentially commences thus allowing the audience to accept the moral of the play and be inclined to acknowledge the Communist message before the actual production begins. The singer appears to be symbolic of wisdom throughout the play; he narrates the fable in a lyrical and poetic fashion with metaphors that offers insight on the various characters feelings and clarification of the various scenes. ...read more.

The Governor and his family soon appear coming out of the church. The Governor's wife enters telling her Adjutant how jealous of Michael she really is. She is desperate for attention from her husband. "But Georgi, of course, will only build for his little Michael. Never for me! Michael is all! All for Michael!" This jealousy of her child is relevant as it contributes to her abandoning her son further on in the act. The Governor returns to his home in order to speak with some architects who are to build a new section onto his palace, which will evidently never happen. The architects arrive, but they soon realize that the Fat Prince has committed a coup and they run away before they are captured. The Governor is soon led onstage in chains. The Singer, who narrates the events to follow, comments that the Governor does not need an architect, but rather "a carpenter will do." This alludes to the fact that Jesus was a carpenter; the Governor needs Jesus to intervene and save him on this Easter Sunday. This will of course not happen. The servants and the two doctors who were attending to Michael soon rush out of the house and run away. Simon returns and searches for Grusha until he sees her. He informs her that he will remain loyal to the old regime and that he will protect the Governor's wife as she flees the city. Grusha tells him he is being "pigheaded" by obeying orders instead of mutinying with the other soldiers. Simon then turns to Grusha and asks her several questions that indicate he is interested in marrying her. She replies to all of them and then anticipates his last question, telling him that her answer is yes. He ignores her answer and quickly tells her about himself before asking her for her hand. She again accepts and Simon gives her a silver cross to wear as a sign of their engagement. ...read more.

Eventually she reaches a glacier that has a deep ravine in it and the only way across it is a broken rope bridge where one rope has snapped and is hanging down the abyss. Grusha informs several merchants that it is compulsory that she crosses the bridge immediately as she is being pursued by ironshirts. The merchants warn her at the unfeasibility of crossing the bridge with a child, yet Grusha ignores their warnings and steps onto the ropes. She succeeds in getting across and triumphantly laughs at the ironshirts when they arrive on the other shore and realize they cannot catch her. Another religious reference occurs at the glacier, where there is a reference to the act of baptism. "I'll wash you, son, and christen you in glacier water." This is a secularized version of baptism, meaning that it has no religious significance. As Grusha develops as a character in the play so does her relationship with Michael, she has given up herself financially, emotionally (as we saw with Simon) but rather than being disheartened by her losses her affection for Michael increases thus making her the "good guy" in the play. "The Caucasian Chalk Circle" is a satirical play in which Brecht finds irony and humor in the most horrific of situations. This form of humor is emphasized by characters such as the doctors and Grusha's husband in the third act. The play deals with social issues that remain relevant in modern day life, issues such as equality presented in communism and the self-indulgence of humans. The play within itself is not realistic, but this artificial world has been created on purpose by the usage of the Singer and the lyrical style of the verses. The songs and the relatively short dialogue as well as the rapid changing of scenes results in the play being especially fast moving. The exaggerated characters of the play, and Brecht's original style of writing and vision all contribute to an impracticable yet exceptionally effective performance. ...read more.