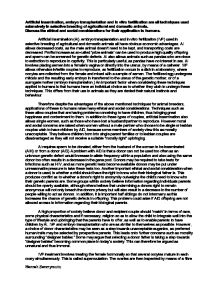 Artificial insemination, embryo transplantation and in vitro fertilization are all techniques used extensively in selective breeding of agricultural and domestic animals.Discuss the ethical and social considerations for their application to humans.

Artificial insemination, embryo transplantation and in vitro fertilization are all techniques used extensively in selective breeding of agricultural and domestic animals. Discuss the ethical and social considerations for their application to humans. Artificial insemination (AI), embryo transplantation and in vitro fertilization (IVF) used in selective breeding of agricultural and domestic animals all have obvious economic advantages. AI allows decreased costs, as the male animal doesn't need to be kept, and transporting costs are decreased. Profits increase as so-called 'prize animals' can be used to produce high quality offspring and sperm can be screened for genetic defects. AI also allows animals such as pandas who are close to extinction to reproduce in captivity. This is particularly useful, as pandas have no interest in sex. AI involves placing semen into a female's vagina or directly into the uterus, by means of a catheter. IVF allows otherwise infertile couples to reproduce, as fertilization occurs in a dish in a laboratory, where oocytes are collected from the female and mixed with a sample of semen. The fertilized egg undergoes mitosis and the resulting early embryo in transferred to the uterus of the genetic mother, or of a surrogate mother (embryo transplantation.) An important factor when considering these techniques applied to humans is that humans have an individual choice as to whether they wish to undergo these techniques. ...read more.

This can therefore be argued as unnatural and thus immoral. IVF treatment involves treating the female hormonally so that several oocytes mature in each ovary simultaneously. This is called superovulation. The ovaries are then inspected by means of a fibre optic light guide and the oocytes collected from their ripe follicles via a catheter. Eggs and sperm are then placed in a sterile nutrient solution and mixed for fertilization to occur. After fertilization, the egg divides, and is then transferred to the uterus. Surplus embryos can be frozen and stored for implantation later, or donated to an infertile couple. Success rates in the UK vary from approximately 15-20%, and are increased by implanting more embryos in the uterus, however in the UK the maximum number of embryos permitted is 3. Success is also more likely in younger patients, under the age of 35; this also minimises risk of genetic defects in the oocyte. Since the birth of the first test-tube baby, Louise Brown, 21 years ago, around 30,000 babies have been born by IVF in the UK alone. Fertility drugs are used during IVF and embryo transplantation, however further research must be carried out to find out the exact risks posed by these. The side effects of the daily drug doses include depression, hot flushes and dizziness, and long-term concerns must be considered. ...read more.

It can be argued that the media has distorted the benefits of IVF. Due to the low success rate, clinics make most of their money out of failure. It has been reported that clinics' figures often appear more favourable to vulnerable couples because they use other statistics to interpret them differently. Some clinics may deliberately omit information that is disadvantageous to them or they offer a definition that is different from the one they are legally obliged to give. This type of immoral behaviour can occur unnoticed thus decreasing the credibility of IVF treatment in itself. Professor Ian Craft of the London Gynaecology and Fertility Centre agrees that only "a small minority" of people who go through IVF treatment are successful. He says there should be ways for couples to accept that they cannot have a child "in an honourable way". "Before IVF people accepted their lot because they couldn't do anything about it. Now they question it," he said. In conclusion, it is vital that ethical and moral considerations are made when considering the application of techniques such as AI, IVF and embryo transplantation. Individuals must decide whether the moral and social concerns specific to the technique they are considering weigh out the desire and need for the technique to be carried out. It is vital that moral and social considerations go hand in hand with scientific research and progress, as without this balance, unnecessary risks may be taken affecting future generations. Hannah Saverymuttu ...read more.