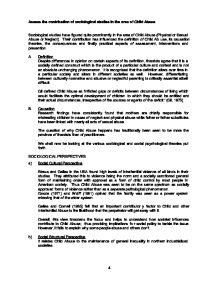 Assess the contribution of sociological studies in the area of Child Abuse.

Assess the contribution of sociological studies in the area of Child Abuse Sociological studies have figured quite prominently in the area of Child Abuse (Physical or Sexual Abuse or Neglect). Their contribution has influenced the definition of Child Abuse, its causation theories, the consequences and finally practical aspects of assessment, interventions and prevention. A. Definition Despite differences in opinion on certain aspects of its definition, theorists agree that it is a socially defined construct which is the product of a particular culture and context and is not an absolute unchanging phenomenon. It is recognised that the definition alters over time in a particular society and alters in different societies as well. However, differentiating between culturally normative and abusive or neglectful parenting is critically essential albeit difficult. Gil defined Child Abuse as 'inflicted gaps or deficits between circumstances of living which would facilitate the optimal development of children to which they should be entitled and their actual circumstances, irrespective of the sources or agents of the deficit.' (Gil, 1975). B. Causation Research findings have consistently found that mothers are chiefly responsible for mistreating children in cases of neglect and physical abuse while father or father substitutes have been linked with nearly all acts of sexual abuse. ...read more.

These two schools compel us to consider matters from the child's point of view as an individual and points to changes in the status of children at a societal level as a solution to the widespread problem of Child Abuse. However, most children cannot be seen in isolation from their parents because of their dependence on them. SOCIAL PSYCHOLOGICAL THEORIES a) Individual Interactionist Approach The key defining feature is that behaviour is seen to be determined less by intrapersonal factors and more by interactions between people. Greater attention is placed on the dynamics of current relationships including taking into account the child's and the spouse/ partner's contribution to situations of abuse (Kadushin & Martin, 1981). This, again, offers another dimension but individuals are seen in isolation from wider social influences and stresses. b) Family Dysfunction Theory This is a broader focus as it is concerned with the impact of family dynamics on the behaviour of its members. This theory is of relatively recent origin from the field of psychiatry and has less widespread influence as an explanatory theory for Physical Abuse than for Child Sexual Abuse. Concern is on the here and now dynamics of family life and ways of breaking or changing patterns of behaviour. ...read more.

In conclusion, I would like to highlight the following: Although defining Child Abuse has been a difficult issue, prominent influences emerge from sociological views with some legal initiatives being introduced. Endeavouring to understand 'why' abuse of children takes place serves three main functions: * It gives a greater sense of control to the worker over events. * It gives a sense of direction for on-going work or treatment. * It informs policy-makers in the field. The broad range of theories outlined along with those from psychological theorists are not always in agreement. Currently there is an impetus to move towards more integrative approaches which try to combine various perspectives and provide a more comprehensive account (Garbarino, 1977; Belsky, 1980). The findings on consequences of Abuse have been conflicting and need more systematic research. Preventative strategies have huge sociological potential by the use of community education programmes, dealing with deprived areas and targeting interventions towards families at risk. Assessment and decision-making have had a number of changes following the 1989 Children Act (which included the Child Assessment Order, Section 43), 'Protecting Children - A Guide for Social Workers undertaking a Comprehensive Assessment' (DOH, 1988) and 'Working Together' guidelines (DOH, 1991). Thus,sociological studies have had enormous impact on every aspect of this field and will continue to do so in the future especially because it remains one of the most prominent areas of work for Social Workers. ...read more.