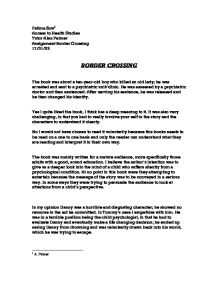 Fatima Sow1 Access to Health Studies Tutor Alan Palmer Assignment Border Crossing 17/01/03 BORDER CROSSING The book was about a ten-year-old boy who killed an old lady; he was arrested and sent to a psychiatric unit/clinic. He was assessed by a psychiatric doctor and then sentenced. After serving his sentence, he was released and he then changed his identity. ...read more.

The book was mainly written for a mature audience, more specifically those adults with a good, sound education. I believe the author's intention was to give us a deeper look into the mind of a child who suffers silently from a psychological condition. At no point in this book were they attempting to entertain because the message of the story was to be conveyed in a serious way. ...read more.

In Tommy's case I empathize with him. He was in a terrible position being the child psychologist, in that he had to evaluate Danny and eventually make a life changing decision; he ended up saving Danny from drowning and was reluctantly drawn back into his world, which he was trying to escape. Tommy save the strangers life because he realized that he was in need of help. The writer sounded emotional, and was involved fully in while writing the book. 1 A. Palmer ...read more.