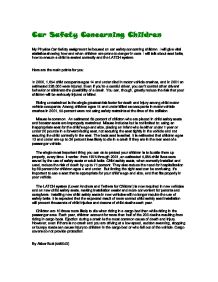 Car Safety Concerning Children My Physics Car Safety assignment is focused on car safety concerning children. I will give vital statistics showing how and when children are prone to danger in cars. I will talk about seat belts, how to ensure a child is seated correctly and the LATCH system. Here are the main points for you: In 2000, 1,654 child occupants ages 14 and under died in motor vehicle crashes, and in 2001 an estimated 228,000 were injured. Even if you're a careful driver, you can't control other drivers' behavior or eliminate the possibility of a crash. You can, though, greatly reduce the risk that your children will be seriously injured or killed. Riding unrestrained is the single greatest risk factor for death and injury among child motor vehicle occupants. Among children ages 14 and under killed as occupants in motor vehicle crashes in 2001, 55 percent were not using safety restraints at the time of the collision. Misuse is common. An estimated 85 percent of children who are placed in child safety seats and booster seats are improperly restrained. Misuse includes but is not limited to: using an inappropriate seat for the child's age and size, placing an infant who is either under 1 year or under 20 pounds in a forward-facing seat, not securing the seat tightly in the vehicle and not securing the child correctly in the seat. ...read more.

either under 1 year or under 20 pounds in a forward-facing seat, not securing the seat tightly in the vehicle and not securing the child correctly in the seat. The back seat is safest. It is estimated that children ages 12 and under are up to 36 percent less likely to die in a crash if they are in the rear seat of a passenger vehicle. Other risk factors: � As of October 1, 2002, 137 children have been killed by passenger air bags. Almost all children killed by passenger air bags were either unrestrained or improperly restrained at the time of the crash. � Most crashes (75 percent) occur within 25 miles of home. The majority also occur on roads with posted speed limits of 40 mph or less. � In 2001, 23 percent of all traffic deaths among children ages 14 and under involve alcohol. Of the children killed in alcohol-related crashes, more than half were passengers in vehicles with drunk drivers. . � Rural areas have higher motor vehicle crash incidence rates and death rates; crashes in these areas also tend to be more severe. The single most important thing you can do to protect your children is to buckle them up properly, every time. It works: from 1975 through 2001, an estimated 5,085 child lives were saved by the use of safety seats or adult belts. Child safety seats, when correctly installed and used, reduce the risk of death by up to 71 percent. ...read more.

Why Kids Are at Risk The popularity of trucks is growing every year, and more parents are using trucks to transport their families. Children are 10 times more likely to die when riding in a cargo bed than while riding in the passenger area. Each year, children account for more than half of the 200 deaths resulting from riding in cargo beds. Ejection during a crash is the most common cause of death and injury. However, even if there is no crash and you are driving at a low speed, sudden swerving, stopping or bumpy roads can cause injury to children in the cargo bed or who fall out of the vehicle. Cargo covers do not provide protection. In fact, they can potentially lead to carbon monoxide poisoning. Protecting Your Family * Never allow anyone to ride in the bed of a pickup truck or an LGV, HGV etc. * Always use child safety seats and/or safety belts correctly. * Child safety seats must not be used on side-facing or rear-facing jump seats. * Be sure at least 80 percent of the child safety seat base is on the truck's seat. * Never place a rear-facing infant seat in front of an air bag. Please see your owner's manual regarding the passenger air bag cut-off switch. * Restrain children ages 12 and under in the back in a forward-facing seat. If there is no back seat available, forward-facing children (over 1 year of age and at least 20 pounds) should be placed in their appropriate child safety seat with the vehicle seat pushed as far back as possible. ...read more.