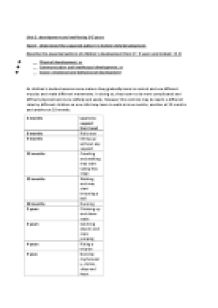 Transfer-Encoding: chunked ﻿Unit 2: development and well-being 0-5 years Task1: Understand the expected pattern in holistic child development. Describe the expected pattern of children?s development from 0 ? 5 years and include: (1.1) * Physical development, or * Communication and intellectual development, or * Social, emotional and behavioural development As children?s bodies become more mature they gradually learn to control and use different muscles and make different movements. In doing so, they learn to do more complicated and difficult physical task more skilfully and easily. However this controls may be learnt a different rates by different children so one child may learn to walk at nine months, another at 12 months and another at 18 months. 3 months Learns to support their head 6 months Rolls over 9 months Sitting up without any support 12 months Crawling and walking ...read more.

These are known as gross motor skills. Control of theses muscles develops from the head down to the shoulders and arms, and finally to the legs. At birth babies hardly move at all, but they soon wriggle and move their legs and arms almost nonstop as they gradually start to learn how to control their movements. By the time they are three months old they will have begun to control their neck muscles. They will be able to lift their head and turn it from side to side if lying on their stomachs, and should be able to push up on their arms. By the time they are six months they will be kicking strongly and can usually roll over from their back to front. ...read more.

From this stage develop very quickly. At 2 years they can run, jump, kick a ball and walk up and down stairs with two feet to a step while at 3 years old they are even more skilful and are able to hop and jump, walk on tiptoe, throw a ball overarm. At 4 years they are able to push themselves along a tricycle and also balance and control themselves. Finally at 5 years they become more experts on things they can climb and skip. They will also have good awareness of things around them and will be able to run around without bumping into things also they will able to show good coordination, they will enjoy running around playing chase. They will be able to play ball games such as football and dance rthymically to music they will enjoy playing on equipment such as swings, slides and climbing frames ...read more.