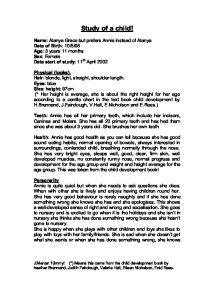 Child development - Study of a child

Study of a child! Name: Alanya Grace but prefers Annie instead of Alanya Date of Birth: 10/5/98 Age: 3 years 11 months Sex: Female Date start of study: 11th April 2002 Physical (looks). Hair: blonde, light, straight, shoulder length. Eyes: blue Size: height: 97cm (* Her height is average, she is about the right height for her age according to a centile chart in the text book child development by H.Brennand, J.Fairclough, V.Hall, E.Nicholson and E.Rees.) Teeth: Annie has all her primary teeth, which include her incisors, Canines and Molars. She has all 20 primary teeth and has had them since she was about 3 years old. She brushes her own teeth Health: Annie has good health as you can tell because she has good sound eating habits, normal opening of bowels, always interested in surroundings, contended child, breathing normally through the nose. She has very bright eyes, sleeps well, good, clear, firm skin, well developed muscles, no constantly runny nose, normal progress and development for the age group and weight and height average for the age group. This was taken from the child development book! Personality Annie is quite quiet but when she needs to ask questions she does. When with other she is lively and enjoys having children round her. She has very good behaviour is rarely naughty and if she has done something wrong she knows she has and she apologises. This shows a well-developed sense of right and wrong and socialisation. She goes to nursery and is excited to go when it is the holidays and she isn't in nursery she thinks she has done something wrong because she hasn't gone to nursery. She is happy when she plays with other children and toys she likes to play with toys with her family/friends. She is sad when she doesn't get what she wants or when she has done something wrong, she knows that she has, she will sit on her own and keep her head down until someone says it is ok. ...read more.

I have planned a simple questionnaire for them to complete while I'm at the park with Alanya. I then hope to interview them and ask them a few more questions. FAR predictions I think that I may find that Alanya's parents will find physical play important to her lifestyle. I don't think they find it as important as they should do because she is more imaginative and creative, and she is always playing with toys in her toy room with her brother. Observations When I arrived at Alanya's house she and Cameran came running up to me because they haven't seen me for a couple of weeks because they have been on holiday. I told Alanya that I was going to take her to the park and I brought Cameran a game for him to play then he didn't get jealous of me taking Alanya and not him aswell. Alanya became excited when I told her that I was taking her to the park. The park isn't far from Alanya's house so we walked it there and when we was on the way she held my hand and she was skipping and running on the way there. When we got to the park Alanya wanted to go on a swing straight away and she ran straight over to it, she was on the swing for about 10 minutes and she need me to start her off pushing her then she used her legs to make her keep moving. Alanya then went on the climbing frame were she was climbing up a fake wall, I had to tell her where to put her foot as she got a bit stuck when she was near the top of the wall. When she got to the top she had to slide down at the other side and she did that with no problem at all. She then did that a few times and once she had done it a few times she didn't need help with co ordination and where to put her feet etc. ...read more.

which he thinks is for girls, when his dad comes home he just wants to play football or watch football on the television or do something sporty and boyish than play with dolls or do fine manipulative things such as drawing, colouring, playing with lego etc. Alanya's imagination is good, and a lot better than Cameran is this probably due to the fact Alanya will sit down and watch television for hours and hours but cameran won't watch television for so long he always wants to be active and doing something different every 15 minutes. With Cameran been a boy and Alanya been a girl I feel there is a difference in the way they are treated sometimes, and how they react to it, as they both think pink is for girls and blue is for boys, which most children think when they are that age but I also think that Julie and Chris have been involved for the children to believe that true fact because when they see other children like new born babies for example if it's a girl it has something pink, and if it's a boy it has something blue. This is sexual stereotyping with boys having blue and girls having pink. During our visit to the local park I discovered several things about Alanya, whilst she was playing I noticed how she has gained more confidence in her own ability to try different things such as the climbing frame. The prediction I made about her physical skills was wrong and she proved much more able than I expected her to be .She showed a wide range of gross motor skills, which is rather unusual for her as she normally prefers to play indoors using her fine manipulative and intellectual skills As you can see from the interview with her parents in visit 2, she does go to them to be as good as they were. ...read more.