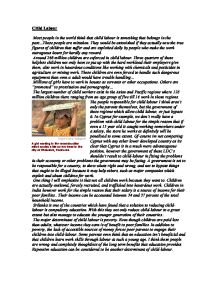 Child Labour Most people in the world think that child labour is something that belongs in the past...These people are mistaken. They would be astonished if they actually new the true figures of children that suffer and are exploited daily by people who make the work outrageous hours for hardly any reward. Around 246 million children are enforced in child labour. Three quarters of these helpless children not only have to put up with the hard workload their employers give them, also work in hazardous conditions like working with chemicals and pesticides in agriculture or mining work. These children are even forced to handle such dangerous equipment than even a adult would have trouble handling... ...read more.

Of-course im not comparing Cyprus with any other lower developed country as its clear that Cyprus is in a much more advantageous position, however the government of these LDC's shouldn't result to child-labour in fixing the problems in their economy or other problems the government may be facing. A government is set to be responsible for a country, to show whats right and wrong, and not to bypass things that ought to be illegal because it may help others, such as major companies which exploit and abuse children for work. One thing I will emphasise is that not all children work because they want to. ...read more.

In addition to poverty, the lack of accessible sources of money forces poor parents to engage their children into child-labour. Some parents even think that an education isn't beneficial and that children learn work skills through labour at such a young age. I think these people are wrong and completely thoughtless of the long term benefits that education provides. Expensive education can be considered to be another determinant of child-labour. Because in some areas education is expensive or thought as useless or might be inaccessible, by this I mean might be far away from home, the children spend their time working. The only way child-labour can be stopped is that poverty is delt with first. I find it highly unlikely that a parent would force his child to work if there wasn't such a need for money. ...read more.