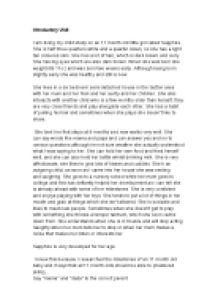 Child Study. I am doing my child study on an 11 month old little girl called Sapphire

﻿Introductory Visit I am doing my child study on an 11 month old little girl called Sapphire. She is half three quarters white and a quarter Asian, so she has a light tan coloured skin. She has a lot of hair, which is dark brown and curly. She has big eyes which are also dark brown. When she was born she weight 6lb 11oz and was born two weeks early. Although being born slightly early she was healthy and still is now. She lives in a six bedroom semi detached house in the Sutton area with her mum and her Nan and her aunty and her children. She also interacts with another child who is a few months older than herself, they are very close friends and play alongside each other. She has a habit of pulling his hair and sometimes when she plays she doesn?t like to share. She took her first steps at 9 months and now walks very well. She can say words like mama and papa and can answer yes and no to various questions although im not sure weather she actually understood what I was saying to her. She can hold her own food and feed herself well, and she can also hold her bottle whilst drinking milk. She is very affectionate, she likes to give lots of kisses and cuddles. ...read more.

floor, this kind of toy will help with her physical development, as she tried to run after it and pick it up. With this fire engine toy she would also pick it up and press the button herself as she enjoyed the sound it made and it made her laugh. She did enjoy dancing whilst I was visiting her, although she would only dance to certain music. She was climbing on the furniture and was trying to climb down on to the floor by herself but her mum was worried she may hurt herself and didn?t allow her to climb of by herself. She expressed the interest to draw which may suggest she enjoys creative play. She came over with the drawing pad in one hand and she was holding the pen in between her fist, this is an example of her fine motor skills. Also she was picking up and holding on to small objects which is an example of her fine motor skills as well. This has given me an idea for one of the other visits as I have now learnt something she enjoys. I was playing peek a boo with her which she found very entertaining and she even tried to do it back to me, this shows good social skills as she was interacting with me and wanted to join in. ...read more.

She liked to mix the colours together and seemed to want as many colours on the paper as possible. The colours she used were, yellow, red, pink, blue, green and purple. The used them all except for the purple one, this shows an example of intellectual development as she understood the difference between the bright colours e.g. yellow, green, pink etc, and the darker colours e.g. purple. I also wanted her to do handprints with the paint, she enjoyed this after I showed her how to do it, when she saw me make a handprint she copied me and wanted to do one of her own, this did get very messy as she wanted to smother paint everywhere, this is an example of hand and eye coordination as she had to watch what she was doing with her hands and make sure she did it right, especially with the fingerprinting. Finger painting helps with her fine motor skills as this activity involves using her fingers and holding a paintbrush, although she insisted on using her fingers to paint she could hold the paintbrush in her fist. Finger painting helps with social development as it involves working with another person and sharing equipment such as, the paint, paper and brushes. Also allowing me to show her how to do it properly shows that she is a patient and sociable child. The physical development she also showed was standing up for a long period of time, considering she is only 12 months old standing up for a long period of time is quite good. ...read more.