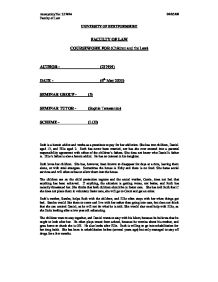 Children and the Law.

UNIVERSITY OF HERTFORDSHIRE FACULTY OF LAW COURSEWORK FOR (Children and the Law) AUTHOR - (237494) DATE - (6th May 2003) SEMINAR GROUP - (5) SEMINAR TUTOR - (Sophie Tarassenko) SCHEME - (LG2) Ruth is a heroin addict and works as a prostitute to pay for her addiction. She has two children, Daniel aged 13, and Ellie aged 2. Ruth has never been married, nor has she ever entered into a parental responsibility agreement with either of the children's fathers. She does not know who Daniel's father is. Ellie's father is also a heroin addict. He has no interest in his daughter. Ruth loves her children. She has, however, been known to disappear for days at a time, leaving them alone, or with total strangers. Sometimes the house is filthy and there is no food. She hates social services and will often refuse to allow them into the house. The children are on the child protection register and the social worker, Carrie, does not feel that anything has been achieved. If anything, the situation is getting worse, not better, and Ruth has recently threatened her. She thinks that both children should be in foster care. She has told Ruth that if she does not place them in voluntary foster care, she will go to Court and get an order. Ruth's mother, Sandra, helps Ruth with the children, and Ellie often stays with her when things get bad. Sandra would like them to come and live with her rather than going into care, but does not think that she can control Daniel, as he will not do what he is told. She would also need help with Ellie, as she finds looking after a two year old exhausting. The children want to stay together, and Daniel wants to stay with his Mum, because he believes that he ought to look after her. He often plays truant from school, because he worries about his mother, and goes home to check she is OK. ...read more.

It is unlikely that this would happen however as Sandra herself admits that she finds it stressful caring for both children. During the duration of the EPO and ICO the children will also be appointed a guardian ad litem who acts in the interests of the children by making enquiries and representing the children's position and instructing a solicitor for them. Again as with the EPO, during the ICO Ruth still retains her right to contact with Daniel and Ellie. The case of A and M v Walsall Metropolitan Borough Council states that "contact should not be terminated at an interim stage, rather it should be maintained save in circumstances of exceptional and severe risk." So assuming that Ruth doesn't do anything dangerous in the presence of the kids that would put them at risk such as taking drugs or becoming physically violent with them then she would be allowed to maintain contact with the children during the duration of the ICO. According to s.38 (10) during the ICO Ruth also has the right to argue the case in full however it is still unlikely that she would be successful in arguing her case as she still has her drug problem to address before the option of returning the kids into her care could even be considered. The main objective of this whole process however, is to find a permanent solution to the problem and provide the kids with a secure and stable home. Once the local authority has completed its investigation, if there is evidence that Daniel and Ellie are at risk in the long term, then solution comes in the form of either a supervision order or a care order. When considering the long term options Daniel and Ellie would have to be considered separately as there is a sizeable age gap and so their individual needs would differ. The social worker Carrie has already stated that she believes it would be best to find a new permanent home for Ellie whereas some attempt should be made to return Daniel to Ruth's care. ...read more.

The supervisor will also advise Ruth on Daniel's upbringing such as encouraging him to attend school more and not truant. If Ruth stops cooperating with the supervision order then it is likely that Daniel would be placed under a care order and possibly removed from Ruth's care. In conclusion, there is quite an important balance to be struck between the rights of a child and also the rights of the parents involved. Article 20 of the UN Convention on the Rights of Children says that "states owe duties of special protection and assistance to children harmed by their families." Balanced against this is the Human Rights Act 1998 which sees the removal of a child from his/ her family as an infringement of the parent's and child's right to respect for private and family life unless the removal is justified under art.8 (2) In practice this balance between the two can be struck however. In the case of L v Finland (2000) the grounds on which to strike this balance were established. Firstly it was stated that care measures should be regarded as temporary and designed to enable a child to be reunited with his/ her parents. Secondly it was also said that the rights of parents to contact their children whilst in care should be protected and any restrictions on this should be justified, necessary and proportionate (art. 8 (2)). So in this case I would advise the client, Ruth that the aim of the local authority is not to cause pain and suffering by taking Daniel and Ellie away from her but merely a method of protection for the children. Whilst this is taking place her rights as their parent isn't taken away but it is limited. She still has the right to contact them and to request that the orders be discharged. So whilst the local authority has the powers to protect the children Ruth's rights are still protected. Last page of your answer 6 (THE PAGE LIMIT FOR THIS COURSEWORK IS :... ...read more.