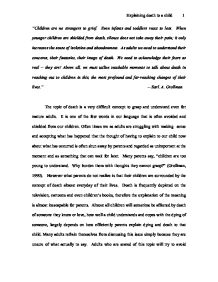 &quot;Children are no strangers to grief. Even infants and toddlers react to loss. When younger children are shielded from death, silence does not take away their pain; it only increases the sense of isolation and abandonment. As adults we need to understan

"Children are no strangers to grief. Even infants and toddlers react to loss. When younger children are shielded from death, silence does not take away their pain; it only increases the sense of isolation and abandonment. As adults we need to understand their concerns, their fantasies, their image of death. We need to acknowledge their fears as real -- they are! Above all, we must utilize teachable moments to talk about death in reaching out to children in this, the most profound and far-reaching changes of their lives." -- Earl. A. Grollman The topic of death is a very difficult concept to grasp and understand even for mature adults. It is one of the few words in our language that is often avoided and shielded from our children. Often times we as adults are struggling with making sense and accepting what has happened that the thought of having to explain to our child now about what has occurred is often shun away by parents and regarded as unimportant at the moment and as something that can wait for later. Many parents say, "children are too young to understand. Why burden them with thoughts they cannot grasp?" (Grollman, 1990). However what parents do not realize is that their children are surrounded by the concept of death almost everyday of their lives. Death is frequently depicted on the television, cartoons and even children's books, therefore the explanation of the meaning is almost inescapable for parents. Almost all children will sometime be affected by death of someone they know or love, how well a child understands and copes with the dying of someone, largely depends on how efficiently parents explain dying and death to that child. Many adults refrain themselves from discussing this issue simply because they are unsure of what actually to say. Adults who are scared of this topic will try to avoid talking to their children about it. ...read more.

It is obvious that these words can lead you to a different path then you wanted to take. A more appropriate choice of wording when speaking to the child might be words such as "dead, stopped working and worn out - simple words to establish that the body is biologically dead." (Schaefer, 1993). These words insure that you are remaining honest to the child and are using the words that would signify that the body is actually dead and is not returning. As a parent, it is important to explain to the child three important things about death the first one is that death is universal. Something that will happen to everything that lives one time or another. All living things must die. It is also very useful to tell the child that "death does not single out bad people for punishment, nor do only the good die young." (Grollman, 1995). Many children believe that if they act good that death is not going to come after them, but if they act bad that they are automatically going to die. It is crucial for a parent to straighten these things out so that child understands that death does not choose between the bad and the good. Along with this, it is also essential that the parent conveys the message that "death is permanent and irreversible" (Grollman, 1995). Children may believe that there is something that can be done such as wishful thinking or giving the person some food or water in order to bring them back to life. It is the parents duty to enforce that there is nothing that could be done. Lastly the parent has to make sure that the child understands the "dead people can no longer feel anything" (Grollman, 1995). This means telling the child that the dead person can no longer smell, feel, touch, see or feel anything that is going on. ...read more.

Death in the family is an emotional and traumatic experience both for the adult and the child, but most especially a child who cannot yet comprehend the complete meaning of death, until they reach a certain cognitive level of development. Explaining death to a young child can seem like a big challenge to a parent, especially when they are unaware of what to say. It is even more difficult, when the child is quite young. To make explaining easier there are a few things to remember when explaining, being honest and simple with the child helps ease the anxiety both for the child and the parent. You need to start discussing death slowly, using things the child understands and that are non- threatening to the child, then working your way up to the child cognitive level of development. Using euphemisms can further confuse the child of the meaning and make them scared to do certain things. In order to be successful in explaining death your child needs to understand three important things, the first is that death is universal, death is permanent and irreversible and lastly, a dead person can no longer feel, hear, smell or see anything. There are also numerous emotions a child can feel, either separate or together. A parent has to support the child in the emotions his/she is feelings ,without minimizing the reaction. It is only then that the child can successfully grieve through the death. Whether the child is six years old or ten years old, the conversation with the child should not be above or below his/her cognitive level of development because the message will likely not be understood properly. Children mourn in silence and are often forgotten and excluded in the grieving process. When children are included in the grieving with the family it allows them to successfully resolve their grieve and lead a more progressive adolescence and adulthood. ...read more.