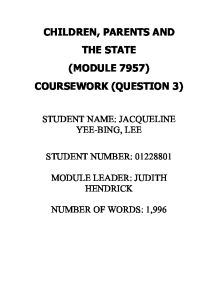 Children, Parents and the State.

CHILDREN, PARENTS AND THE STATE (MODULE 7957) COURSEWORK (QUESTION 3) STUDENT NAME: JACQUELINE YEE-BING, LEE STUDENT NUMBER: 01228801 MODULE LEADER: JUDITH HENDRICK NUMBER OF WORDS: 1,996 Before examining this question directly, it would be helpful to first look at the way in which children are regarded as a special group within society. Society's perception of children is complex; although their characteristics are seen as undesirable; children are also often seen as innocent and incapable of evil. This may explain the sense of shock that surrounded the Jamie Bulgar murder.1 It is common to assume that children need care and support, and to be taken care of by adults. Although this is largely true, it is undeniable that children are not just inactive recipients of parental care, they also interact with their family. Interestingly, it can even be argued that parenting is a negotiated enterprise where parent and children cooperating together in their family life.2 An adolescent may in some way be like a child and some ways like an adult. Therefore, it is not surprising that the law has developed a flexible approach, treating adolescent as adults for some purposes and as children for others. Rights are important and have been called 'valuable commodities'3, important moral coinage. ...read more.

The rule for representation of children in legal proceedings differs depending on whether the case is brought in private law or public law. In this question, we will only look at private law proceedings. As a general rule, a child cannot bring or defend legal proceedings otherwise than through a next friend or a guardian ad litem. However, a child with 'sufficient understanding', with permission of the court, can bring proceeding under the inherent jurisdiction of the court without a next friend or guardian ad litem, or can apply during such proceedings to discharge the next friend or guardian.25 Again, as established by case law, the courts have the final word over whether children have sufficient capacity to instruct a solicitor to carry through legal proceedings without the services of a guardian ad litem.26 The court also has the power to order that a child be separately represented in any family proceedings, but this power is rarely used.27 The cases of Re S (A Minor)(Independent Representation) and Re H (A Minor) (Role of Solicitor)28 reflects the 'judicial balance', recognising that 'a child's wishes are not to be discounted or dismissed simply because he is a child. He should be free to express them and decision-makers should listen'29 and 'the fact that a child is, after all, a child.'30 Where the child can dismiss the Official Solicitor, the court retains him in a different, and it has to be conceded, far from clear, capacity. ...read more.

This is probably the only significant gap in the Children Act 1989 which need to be considered. In conclusion, it is indisputable that today, children had obtained larger access to the courts to settle family disputes. However, Freeman recognizes the existence of stress may affect children's cognitive process,40 which may not be foreseen by children themselves. Moreover, giving children leave to obtain section 8 orders, may put a risk of breaking the child's relationship with their parents and emotionally damaging for children. Accordingly, it may be suggested that, to protect children from such harm, a compulsory mediation process for all children seeking leave under section 10(8) could conceivably be introduced, but with great care to avoid children being, in so doing, excluded from access to the courts. Another proposal would be, as in the case of public law proceedings, providing children with the services of both a solicitor and guardian ad litem. This way, the child would be protected from any aspects which are damaging to her and at the same time, being guided and supported by her guardian ad litem throughout the litigation. If these suggestions are taken into account, it would be that the law had given children the right to conduct their own litigation and at the same time, protecting them from the stress of litigation. ...read more.