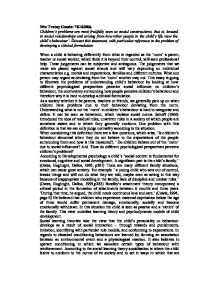 Children's problems are most fruitfully seen as social constructions, that is, located in social relationships and arising from how other people in the child's life view the child's behaviour'. Discuss

Mrs Tracey Goode: T6164966. Children's problems are most fruitfully seen as social constructions, that is, located in social relationships and arising from how other people in the child's life view the child's behaviour'. Discuss this statement, with particular reference to the problem of developing a clinical formulation. When a child is behaving differently from what is regarded as the 'norm' a parent, teacher or social worker, which feels it is beyond their control, will seek professional help. These judgements can be subjective and ambiguous. The judgements that we make are placed against social strands and will vary depending on individual characteristics e.g. morals and expectations, families and different cultures. What one person may regard as deviating from the 'norm' another may not. This essay is going to illustrate the problems of understanding child's behaviour by looking at how different psychological perspectives perceive social influence on children's behaviour, the controversy surrounding how people perceive children's behaviour and therefore why it is hard to develop a clinical formulation. As a society whether it be parents, teachers or friends, we generally pick up on when children have problems due to their behaviour deviating from the norm. ...read more.

There are different rules, rituals and regulations. c) Those making judgements may vary in their expectations of children's behaviour, there tolerance of difficulties and the effectiveness of their approach to maintaining discipline. Each of the above is actors, which will modify the expression and identification of what is regarded as problems within the child. 'Difficulties arise when the behaviour and goals of the child lack 'goodness of fit' with the social environment to which the child is expected to adapt (Chess and Thomas, 1984) Apart from the issue of determining why the child is behaving out of the 'norm', psychologists also have the problems of arriving at a clinical formulation. These problems include developing a good therapeutic relationship, standardising assessment and diagnosis. Whether a child's behaviour is identified, as a problem becomes a judgement about where to draw the line between normality and abnormality, health and pathology, integration and disturbance. A clinical psychologist will attempt to see things from the child's point of view, which is difficult, as the child has usually attained characteristic behaviours of being distrustful, morose and uncommunicative. They must also be sympathetic to the child's needs as well as empathetic in order to develop a good therapeutic relationship but must not allow themselves to be bias. ...read more.

With the more environmental therapy the psychologists would include working with the surrounding people as well as the immediate child. Another issue is looking at not only identifying the problems that the child is experiencing but also ways in which this behaviour can be modified. The therapist may arrange schedules of rewards, withholding of rewards and punishment to achieve this modification. 'Given these two major dimensions along with different types of therapy vary, it can be seen that therapy with children is not a unified area, with universal approaches and frames of reference. It is one of the areas within applied psychology where the disagreements between practioners of different theoretical persuasions are at least as great as any commonality in method.' (Oates, Hoghughi, Dallos, 1995) As it can be seen by the evidence illustrated looking at children's problems, identifying the issues and providing the most suitable form of therapy is a difficult and complicated process. To obtain a clinical formulation, characteristics such as the child's surrounding environment, comparison of behaviourisms, expectations of the family and individual characteristics need to be taken into consideration. My perspective is that children's behaviour is influenced by a social context and is troublesome as well as troubled, disorderly as well as disordered. ...read more.