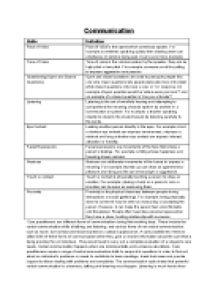 Transfer-Encoding: chunked ﻿Communication Skills Definition Pace of Voice Pace of voice is the speed which somebody speaks. For example; sometimes speaking quickly then slowing down can emphasise on what is being said, it can sound more dramatic. Tone of Voice Tone of voice is the volume spoken by the speaker, they can be high pitch or low pitch. For example; someone could be yelling to express aggression and passion. Questioning (Open and Closed Questions) Open and closed questions are used to persuade people into one side. Open questions lets people elaborate more into detail while closed questions only have a ?yes? or ?no? response. An example of open question would be ?where were you born?? and an example of a closed question is ?Are you a female?? Listening Listening is the act of mindfully hearing and attempting to comprehend the meaning of words spoken by another in a conversation or speech. For example; a teacher speaking directly to student, the student would be listening carefully to the words. Eye Contact Looking another person directly in the eyes. For example; short or broken eye contact can express nervousness, shyness or mistrust and long unbroken eye contact can express interest, attraction or hostility. ...read more.

The nursery manger would be professional when writing letters in a formal language because informal would make it casual and make them look unprofessional or seem to the parents. Formal would show the parents that the nursery is reliable in caring for their children. Another similar scenario would be a nursery nurse formally speaking to a nursery manger or child protection officer about suspected abuse. Abuse is a serious topic that involves a wellbeing of a child and so can?t be casually said or assumed by a nursery nurse, it has to be professional. A child is physically, emotionally, socially and maybe be intellectually affected by abuse. So when a nursery nurse speaks to the manger or a child protection officer they would have to be professional and stern about their opinions and facts. They would have to inform the manager and child protection officer about the child?s behaviour by verbally communicating because non-verbal communication, such as touch or contact and proximity would not be necessary for this scenario. The nursery nurse needs to clearly tell the child welfare state and behaviour in a manner that the manager and child protection officer can understand what the nurse is stating without having to read between the lines. Reference: http://www.nurseryworld.co.uk/communication http://www.pearsonschoolsandfecolleges.co.uk/FEAndVocational/HealthAndSocialCare/BTEC/BTECLevel2FirstHealthandSocialCare/Samples/StudentBook/BTECLevel2FirstHealthandSocialCareStudentBookSampleMaterial-Unit1CommunicationinHealthandSocialCare.pdf ...read more.