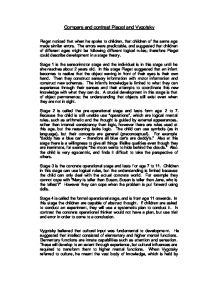 Compare and contrast Piaget and Vygotsky.

Compare and contrast Piaget and Vygotsky Piaget noticed that when he spoke to children, that children of the same age made similar errors. The errors were predictable, and suggested that children of different ages might be following different logical rules; therefore Piaget could describe development in a stage theory. Stage 1 is the sensorimotor stage and the individual is in this stage until he she reaches about 2 years old. In this stage Piaget suggested that an infant becomes to realize that the object waving in front of their eyes is their own hand. Then they construct sensory information with motor information and construct new schemas. The infant's knowledge is limited to what they can experience through their senses and their attempts to coordinate this new knowledge with what they can do. A crucial development in this stage is that of object permanence; the understanding that objects still exist even when they are not in sight. Stage 2 is called the pre-operational stage and lasts form age 2 to 7. ...read more.

In this stage the children are capable of abstract thought. If children are asked to conduct an experiment, they will use a systematic plan to conduct it. In contrast the concrete operational thinker would not have a plan, but use trial and error in order to come to a conclusion. Vygotsky believed that cultural input was fundamental to development. He suggested that intellect consisted of elementary and higher mental functions. Elementary functions are innate capabilities such as attention and sensation. These will develop to an extent through experience, but cultural influences are required to transform them to higher mental functions. When Vygotsky referred to culture, he meant the vast body of knowledge, which is held by books and "experts" and he thought this knowledge is largely conveyed through language. Therefore adults can teach the basics that are learnt at early ages, as they are "experts" compared to the child, who has limited knowledge. As a result Vygotsky emphasised contact time with adults is important for a child's development. Vygotsky put forward four stages of development. ...read more.

Piaget and Vygotsky's work have similarities; both believe that a child is born with innate capabilities, and both think one of them is sensory. There are four stages in each model, but these stages have few similarities. In stage one trial and error is a concept used in both to describe the child's efforts for tasks. However the models then differ in their views. Piaget's ideas are based on experiments, which determined what stage the child is at, and the stages are determined by innate, maturational changes. Although the ages differ at when different stages are reached, the sequence does not change and the cognitive operations and structures defining a stage should form an integrated whole. Whereas Vygotsky emphasised the notion that cognitive development depends largely on social factors. Vygotsky believed that "any function in the child's development appears twice, or on two planes. First it appears on the social plane, and then it appears on the psychological plane. The child can be thought of, as an apprentice, learning from social interaction from adults and older children, who have acquired more knowledge than themselves. This approach is very different from Piaget's, where the emphasis is on the child learning from self-discovery. ...read more.