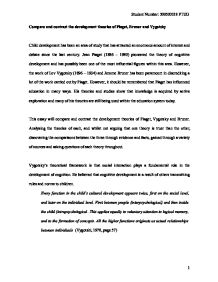 Compare and contrast the development theories of Piaget, Bruner and Vygotsky

Compare and contrast the development theories of Piaget, Bruner and Vygotsky Child development has been an area of study that has attracted an enormous amount of interest and debate since the last century. Jean Piaget (1886 - 1980) pioneered the theory of cognitive development and has possibly been one of the most influential figures within this area. However, the work of Lev Vygotsky (1896 - 1934) and Jerome Bruner has been paramount in discrediting a lot of the work carried out by Piaget. However, it should be remembered that Piaget has influenced education in many ways. His theories and studies show that knowledge is acquired by active exploration and many of his theories are still being used within the education system today. This essay will compare and contrast the development theories of Piaget, Vygotsky and Bruner. Analysing the theories of each, and whilst not arguing that one theory is truer than the other, discovering the comparisons between the three through evidence and facts, gained through a variety of sources and asking questions of each theory throughout. Vygotsky's theoretical framework is that social interaction plays a fundamental role in the development of cognition. ...read more.

Bruner stated that representation "is the way that we manage to keep hold of our past experiences" (Bruner, 1966, pg 11). The enactive mode of learning takes place by manipulation of objects and things. The iconic mode objects are represented by visual images. In the symbolic mode, symbols are used instead of objects or mental images. A major difference between the theory of Piaget and Bruner is that whilst Piaget's fourth stage ends at the end of childhood, Bruner's theory states that whilst children pass through all three of his stages during childhood, the adult continues to use these three modes throughout life. Bruner quoted that 'any subject could be taught to any child at any age in some form that is honest' (http://www.nkjo-legnica.oswiata.org.pl/data/orbis/text/KURPAGOT.htm) This is explained by Bruner in the use of prime numbers and how young children can be taught mathematical problems. 'The concept of prime numbers appears to be more readily grasped when the child, through construction, discovers that certain handfuls of beans cannot be laid out in completed rows and columns. Such quantities have either to be laid out in a single file or in an incomplete row-column design in which there is always one extra or one too few to fill the pattern. ...read more.

Piaget also ignores the importance of social relationships, whereas Bruner says that interaction within the environment is essential within the process of cognitive development. In Summary it should be remembered that children think differently from adults and there are major differences in the way children of different ages understand the world around them. Piager, Bruner and Vygotsky all showed that a child's learning and understanding is influenced by the environment, society and culture, and individual abilities can be traced within the Zone of Proximal Development, but there are certain stages of development that all children, either with or without the assistance of adults will pass through. However, as stated previously this is dependant on the child's own development and has to take into consideration things such as social surroundings, disabilities and the availability of peers, adults and mentors. Piaget, Vygotsky and Bruner have all produced theories which still influence the way children are raised in society today and whilst they have many contrasting ideas, there are also similarities in their work. It should also be remembered that whilst many have criticised the work and theories of Piaget he did create the first study into the cognitive development of children, and his theory encouraged many other psychologists into further studies of development. ...read more.

This is a very good report about the similarities and differences between the learning theorists. Its strengths are the research involved and the understanding the report demonstrates about the ways in which children learn. A weakness is that in some areas no real opinions are given and some sections are just copied from sources. ****