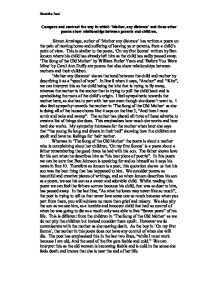 Compare and contrast the way in which 'Mother, any distance' and three other poems show relationships between parents and children.

Compare and contrast the way in which 'Mother, any distance' and three other poems show relationships between parents and children. Simon Armitage, author of 'Mother any distance' has written a poem on the pain of moving home and suffering of leaving your parents, from a child's point of view. This is similar to the poem, 'On my first Sonne' written by Ben Jonson where his child has already left him as the child has sadly passed away. 'The Song of the Old Mother' by William Butler Yeats and 'Before You Were Mine' by Carol Ann Duffy are poems that also show relationships between mothers and their children. 'Mother any distance' shows the bond between the child and mother by describing it as a "spool of tape". In line 8 when it says, "Anchor" and "Kite", we can interpret this as the child being the kite that is trying to fly away, whereas the mother is the anchor that is trying to pull the child back and is symbolising the roots of the child's origin. ...read more.

In the last line, "As what he loves may never like so much", the poet is trying to tell us that never love some one so much because when you part from them, you will achieve no more than grief and misery. We also pity the son as we see him, as a humble and innocent child that had no control of when he was going to die as a result only was able to live "Seven years" of his life. This is different from the children in 'The Song of the Old Mother' as we do not pity the children but instead consider them spoilt. However we do commiserate with the mother as she nearing death. As the boy in 'On my first Sonne', the mother in this poem does not have any control of when she will die. The poet has emphasised this in the last two lines, "while I must work because I am old, And the seed of the fire gets feeble and cold." ...read more.

The love and care between a mother and her child is also shown in the poem "Before You Were Mine". This is shown when the mother no longer goes out dancing with her friends once her child is born. This shows that the mother is so responsible and cares for her child. This is similar to the mother in "The Song of the Old Mother" as the mother there looks after the home and acts as a 'traditional' mother. This is also similar to the mother in 'Mother any distance' because the mother there looks out and helps her son out when he needs her. I find that the best parents are the father from 'On my first Sonne' and the mother from 'Mother any distance'. This is because the father really loves his son and remembers all the happy memories that had with his son. I like the mother because she helps her son throughout each step of his life and even though it is tough for her to leave her son she knows that it is for her son's happiness. I think that these are the two ideal parents. Shraddha Patel ...read more.