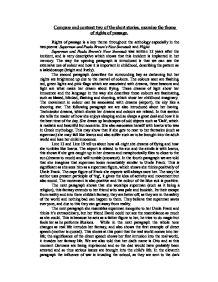 Compare and contrast two of the short stories, examine the theme of rights of passage.

Compare and contrast two of the short stories, examine the theme of rights of passage. Rights of passage is a key theme throughout the anthology especially in the two poems: Superman and Paula Brown's New Snowsuit and Flight. Superman and Paula Brown's New Snowsuit was written 13 years after the incident, and is very descriptive which shows that this incident is implanted in her memory. The way the opening paragraph is introduced is that we can see the extensive use of colour and how it is important in childhood, describing the pattern as a kaleidoscope (bright and lively). The second paragraph describes the surrounding bay as darkening but her nights are brightened up due to the marvel of colours. The colours seen are flashing red, green lights and pink flags which are associated with dreams, these beacons and light are what make her dream about flying. These dreams of light show her innocence and the language in the way she describes these colours are fascinating, such as blazed, blinked, flashing and shooting, which show her childhood imaginary. The movement in colour can be associated with dreams (airport), the sky like a shooting star. The following paragraph we are also introduced about her having Technicolor dreams, which shows her dreams and colours are related. In this section she tells the reader of how she enjoys sleeping and so sleeps a great deal and how it is the best time of the day. ...read more.

While in the thirty- first paragraph (line 145 to 153), this is metaphorical as she is looking for security plus light. Which she sees in the window, a room where people are happy, this can be related to her fantasies and dreams. Also the literal meaning of the reflection as she imagines herself they're talking, but that is distant now outside a happy picture, in the other world that does not deal with what happened to Paula. In the lines from 160 to 169, her mother and Uncle Frank think she has done it and acts patronising, she has no reason to lie and there is a lot of empathy for her sound like she is lying but you know that is not the truth. In the following lines 170 to 178 when she goes upstairs in the darkness, Uncle Frank comes into the shadow not like the bright light superman comes in, it is all murky. While in the next paragraph you can see that this is not a happy ending which effects her childhood as she fantasised about superman saving her, but she is losing her dreams, he cannot make it a happy ending. In the final paragraph the darkness is filling in the light, the black shadow is pulling out the light from her dream world that is burned into her memory. This is a defiant moment in her life as she loses her childhood and enters adulthood the light and movements disappear. ...read more.

So he is happy because he has proven a point and the granddaughter is crying because he has not realised that she will not return like the bird. She cries as the grandfather thinks he has proven a point to there but she cries, as she knows he is wrong and will be unhappy. The grandfather though does not accept this and thinks she will return like the prized bird. She may even be crying because she may realise she will never leave him she will get married but be living down the road so the attachment will never end. In Flight we can see old age is portrayed have having a child like naivety, and are very possessive and moan when they find they cannot keep these possessions. The old man has his possessions his granddaughter (youth) and prized bird's, but have the worst qualities such as pathetic, selfish and nasty. While we can see the childhood innocence of caring about her grandfather but also following her fantasies of going off with this boy and we can see that acts as a stronger figure then her grandfather, reassuring him. We mainly can see how old age is portrayed as possessive and a nuisance and we can see all their worst qualities and their naivety. In conclusion: I think that both of these poems have a key theme of growing up. They both have many similarities and many differences. I think that the impact of change is present in both of the poems in quite a significant way. ...read more.