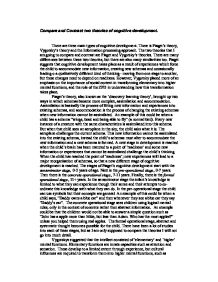 Compare and Contrast two theories of cognitive development. There are three main types of cognitive development. There is Piaget's theory, Vygotsky's theory and the Information processing approach. The two theories that I am going to compare and contrast are Piaget and Vygotsky's theories. There are many differences between these two theories, but there are also many similarities too. Piaget suggests that cognitive development takes place as a result of experiences which force the child to accommodate new information, creating new schemas and occasionally leading o a qualitatively different kind of thinking- moving from one stage to another, but these changes need to depend on readiness. However, Vygotsky placed more of an emphasis on the importance of social context in transforming elementary into higher mental functions, and the role of the ZPD in understanding how this transformation takes place. Piaget's theory, also known as the 'discovery learning theory', brought up two ways in which schemas became more complex, assimilation and accommodation. Assimilation is basically the process of fitting new information and experiences into existing schemas, and accommodation is the process of changing the existing schemas when new information cannot be assimilated. An example of this could be when a child has a schema "wings, beak and being able to fly" (a normal bird). ...read more.

There have been a lot of studies into each of these stages, but as I am only supposed to compare the theories I will not go into much detail. Vygotskys suggested that the intellect consisted of 'elementary' and 'higher' mental functions. Elementary functions are innate capacities such as attention and sensation. These develop to a limited extent through experience, but cultural influences are required to transform them into higher mental functions, such as problem solving and thinking. An individual would not progress further than the elementary functions, without culture. Vygotsky was referring to the body of knowledge, which is held by, for example, books and 'experts' (persons with large amounts of knowledge), and which is largely transmitted through language, when he used the concept 'culture'. Vygotskys used 4 stages of concept formation, which are vague syncretic stage; complexes stage; potential concept stage; and mature concept stage. The vague syncretic stage saw children failing to use systematic strategies and showed little or no understanding of the concepts. In the complex stage is when non-random strategies are used, but these strategies were not successful in finding the main features of each concept. The potential concept is when systematic strategies were used, but they were limited to focusing on one feature at a time, like a shape. ...read more.

For Piaget the main criticism was that he underestimated the age at which children could do things. This may be because he failed to distinguish between competence and performance. Piaget's studies tested performance and then he assumed that a child who failed simply lacked the underlying cognitive structures that he believed were needed to succeed on that task. A study by Borke showed that several factors are important in assessing the competence of young children. But, simply focusing on age limits is to miss the central point of Piaget's theory that universal, qualitative, biologically regulated cognitive changes occur during development. A study by Smith supports this, as he did a cross cultural research based on Piagets theory. Piaget produced the first comprehensive theory of children's cognitive development. The theory has been more extensively developed than any other it has changed our ideas about children and has had a general influence on educational practice has. Also the good theories should generate research and Piaget's theory has certainly done so. Piaget's theory under emphasizes the role of language and social interaction in cognitive development. Vygotskys theory focuses on the process of cognitive development rather than the outcome, and this is harder to test. Vygotskys ideas on cognitive development have had considerable influence. Although Vygotsky produced very little direct empirical evidence, other researchers have provided support for his ideas and their application. ...read more.