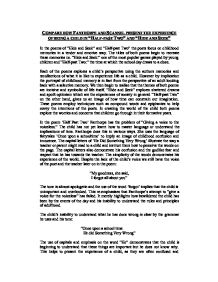 COMPARE HOW FANTHORPE AND SCANNEL PRESENT THE EXPERIENCE OF BEING A CHILD IN "HALF-PAST TWO" AND "HIDE AND SEEK" In the poems of "Hide and Seek" and "Half-past Two" the poets focus on childhood memories in a tender and emotive way. The titles of both poems begin to recreate these memories i.e. "Hide and Seek:" one of the most popular games played by young children and "Half-past Two:" the time at which the school day draws to a close. Each of the poems explores a child's perspective using the authors memories and recollections of what it is like to experience life as a child. However by implication the portrayal of childhood memory is in fact from the perspective of an adult looking back with a selective memory. We then begin to realise that the themes of both poems are incisive and symbolic of life itself. "Hide and Seek" explores shattered dreams and spoilt optimism which are the experiences of society in general. "Half-past Two" on the other hand, gives us an image of how time can constrain our imagination. These poems employ techniques such as compound words and epiphanies to help covey the intentions of the poets. In creating the world of the child both poems explore the worries and concerns that children go through in their formative years. In the poem 'Half Past Two' Fanthorpe has the problem of "Giving a voice to the voiceless." The child has not yet learnt how to master language or understand the implications of time. Fanthorpe does this in various ways. She uses the language of fairytales 'Once upon a schooltime' to imply an image of childhood confusion and innocence. ...read more.

However, the use of the words "ever" and "hides" put a negative aspect on the ending which suggests that children as well as adults will always have something hidden from them. On the whole, Fanthorpe uses techniques such as oxymorons, purposeful grammatical errors and symbolic imagery in order to create the experience of being a child. The use of an epiphany at the end demonstrates how children reach the milestone where upon they become educated and this changes and furthers the experience of being a child. Many of these techniques (and others) are used by Vernon Scannel in "Hide and Seek." Despite the similarity in style, a completely different impression is created at the end of the two poems. The poem "Hide and Seek" begins with "Call out. Call loud I'm ready." The use of short sentences helps to illustrate the excitement of the child. Although "Half-past Two" opens in a much calmer and less eventful way, and yet the experience of being a child is still created. This excited opening results in the child hiding from his friends which are symbolic of threatening outside forces. "They'll never find you in this salty dark" The use of the word "They'll" with a capital shows the initial importance of these outside forces, and being in isolation without them can be very disheartening. In comparison with "Half-past Two," Vernon Scannel's poem is very similar in this aspect. Both of them show that exclusion from the outside world can often leave a child hopeless and vulnerable. As the reader we infer that the children in both poems are seen to be unimportant. This is emphasised by the teacher's forgetfulness in "Half-past Two" and the child's 'friends' in "Hide and Seek." ...read more.

The use of the word "stiff" is similar to rigamortis which is a symbol of death, this is furthered by the use of the word "bites" which is very violent and the suffocation which is apparent as the "sand moves through your throat." The alliteration of "dark damp" is also symbolic of death as the experience becomes painful and the once happy manner is now transferred into images of death and pain. The change in tone from excitement to fright is magnified towards the end of "Hide and Seek:" "Here I am! Come and own up, I've caught you!' The darkening garden watches. Nothing stirs." What was supposed to be a moment of victory has instead turned to loneliness as the atmosphere becomes threatening. This is heightened by the effect of building up tension and excitement in the earlier part of the poem. This ending is almost the complete opposite of "Half-past Two" where the ending is far more positive and reassuring. In conclusion, "Half-past Two" and "Hide and Seek" attempt to show the problems and experiences that children go through. In showing this struggle both poems have moments of realisation although one is positive and one is negative. This single contrast results in an extremely different ending for each poem. "Hide and Seek" presents shattered dreams, abandonment and bitter disappointment as we realise no one really cares. This is very dark and distressing when compared to "Half-past Two" which has a far more positive ending where the reader infers that whenever a child is in trouble or confused, a responsible adult will always help them. When placed side by side, these poems are the completely antithesis of one another and yet they both still manage to present the experience of being a child. ...read more.