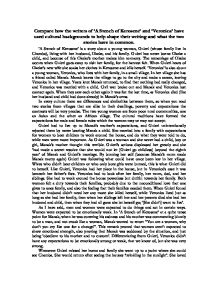 Compare how the writers of 'A Stench of Kerosene' and 'Veronica' have used cultural backgrounds to help shape their writing and what the two stories have in common.

Compare how the writers of 'A Stench of Kerosene' and 'Veronica' have used cultural backgrounds to help shape their writing and what the two stories have in common. 'A Stench of Kerosene' is a story about a young woman, Guleri (whose family live in Chamba), living with her husband, Okeke, and his family. Guleri has never borne Okeke a child, and because of this Okeke's mother makes him re-marry. The remarriage of Okeke occurs when Guleri goes away to visit her family, for the harvest fair. When Guleri hears of Okeke's new wife she soaks her clothes in Kerosene and kills herself. 'Veronica' is also about a young woman, Veronica, who lives with her family, in a small village. In her village she has a friend called Manak. Manak leaves the village to go to the city and make a career, leaving Veronica in her village. Years later Manak returned, to find that nothing had really changed, and Veronica was married with a child. Civil war broke out and Manak and Veronica lost contact again. When they saw each other again it was for the last time, as Veronica died (like her husband and child had done already) in Manak's arms. In every culture there are differences and similarities between them, so when you read two stories from villages that are alike in their dwellings, poverty and expectations the contrasts will be very precise. The two young women are from poor rural communities, one an Asian and the other an African village. The cultural traditions have formed the expectations for male and female roles which the women may or may not accept. Guleri had to live up to Manak's mother's expectations, and Guleri unintentionally rejected them by never bearing Manak a child. She married into a family with expectations for women to bear children to work around the house, and do what they were told to do, while men were more important. ...read more.

The writer needed to use something to show their sadness despite concealment of their feelings. The writer did this by not only using the stick as a form of symbolism parallel to their lives, but also the stick bobbing down the stream was an objective correlative. Towards the end of the story the river was used again. Okeke walked down to the river, 'he dug [Veronica] a grave and buried her and afterwards [he] watched the flow of the stream until it was time for [him] to go away for the last time.'. It showed their friendship moving away on the flow of the stream, the continual flow of the river showed that after all that had happened time goes on. The river that saw their friendship move apart twice would still flow on. Contrarily to Okeke's life going on and time continuing, Manak's life ended the moment he found out that Guleri was dead. Manak would stare, his face uncomprehending and expressionless. The moment Manak learned of Guleri's suicide by fire, his own life proceeded to burn out. Despite not dying, Manak followed a similar fate, which not even the love of another family member, or baby of his own could save him. The moment Manak's child was placed in his arms, he thought of Guleri, '"Take [my baby away]!"[Manak] shrieked hysterically, "take him away! He stinks of kerosene."' . It was the fact that Guleri didn't bear a child that indirectly killed her. The horror that filled his eyes and his hysterics that followed when he saw his child, are because, not bearing a child caused actions which provoked Guleri to want to kill herself. Then she killed herself using kerosene. These two things result in the baby metaphorically smelling of kerosene. Although Guleri was expected by Manak's family to be a wife, become a mother and be adult, Guleri was still childish. ...read more.

When a child is looking forward to something, it takes ages to get there. From an outside perspective of the whole story I regard Guleri's time as going by very quickly, as I know she has a very short amount of time left to live. The length of time between events in the story isn't very clear, for example, from the time when Guleri left Manak to go to Chamba and Manak remarried seemed like a long time, when it was actually just a couple of days. In contrast the writer of Veronica hasn't made the idea of time seem very important, but as the time passed by we were told about it. Right at the start we were told 'When I was twelve' by the narrator introducing us to their age. I then thought of how life should be for a twelve year old, and Veronica's childhood having been taken away from her. Then later to show us how much time had passed since they had seen each other, the narrator said 'It was ten years before I returned'. I think we just need to understand where in their lives we are reading, and the actual time surrounding the people isn't particularly important. The relationship between the unimportance of time and Veronica's lack of knowledge of time I think is important. Veronica would have only understood the years as they passed. Her death would have been a time that she understood. Manak's hysterical shrieks made me wonder whether Manak and Guleri's life would have been fine if Guleri hadn't gone to the fair, as neither of them were happy with the situations that resulted from Guleri going to Chamba. I don't think they would have been happy. I think Guleri would have ended up like Veronica. Guleri would have missed her family greatly, and if she continued to not bear Manak a child she would never have been able to leave him. As Guleri's longing to see her family grew larger, she would have lost the will to live and let herself go, and her childish fire would have burnt out. ...read more.