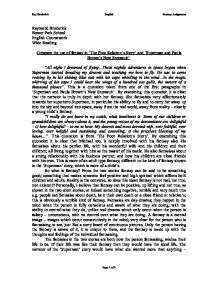 Compare the use of fantasy in 'The Poor Relation's Story' and 'Superman and Paula Brown's New Snowsuit'.

Raymond Broderick Bower Park School English Coursework Wide Reading Compare the use of fantasy in 'The Poor Relation's Story' and 'Superman and Paula Brown's New Snowsuit'. "All night I dreamed of flying...These nightly adventures in space began when Superman started invading my dreams and teaching me how to fly. He use to come roaring by in his shining blue suit with his cape whistling in the wind...In the magic whirring of his cape I could hear the wings of a hundred sea gulls, the motors of a thousand planes". This is a quotation taken from one of the first paragraphs in 'Superman and Paula Brown's New Snowsuit'. By examining this quotation it is clear that the narrator is truly in depth with her fantasy. She fantasizes very affectionately towards her superhero Superman, in particular his ability to fly and to carry her away up into the sky and beyond into space, away from the real world, away from reality - clearly a young child's fantasy. "I really do not know in my castle, what loneliness is. Some of our children or grandchildren are always about it, and the young voices of my descendants are delightful - O how delightful! - to me to hear. My dearest and most devoted wife, ever faithful, ever loving, ever helpful and sustaining and consoling, is the priceless blessing of my house...". This quotation is from 'The Poor Relation's Story'. By examining this quotation it is clear that Michael too, is deeply involved with his fantasy also. He fantasizes about his perfect life, with his wonderful wife and his children and their children; all living together with him as the master of his castle. He also fantasises about a strong relationship with his business partner, and how his children are close friends with his own. This is more of an adult type fantasy; different to the kind of fantasy shown in the 'Superman' story, which is more of a child's. ...read more.

A quotation I believe shows Michael's fantasy well, is the one I used at the beginning of this assignment (paragraph two). The quotation, which is just a small part of an entire page, which is Michael giving his fantasy to the reader, gives a thorough detailed account of what he wanted out of life. This fantasy has taken a tremendous amount of construction and planning and repetition for Michael to repeat an entire page plus of dialogue from memory. He interrupts himself to add extra feelings to what he is saying; "...are delightful - O how delightful! - to me to hear", the use of exclamation marks emphasises the tone in which Michael is speaking; he is shouting his emotions to his family. His fantasy wife is too good to be true, he describes her with many adjectives and in a very positive way indeed; he doesn't criticise her in any way even though she actually left him. Michael wanted children and grandchildren and a perfect family union with close friends and family - he hasn't got this in real life and so fantasizes it, it is the only way he, as an elderly man, can obtain such things. I believe that there is the possibility that if Michael's fantasy wasn't a fantasy but reality, it wouldn't be as wonderful as he imagined. After all, it is extremely rare to have a wife with all of those qualities even in the Victorian times, and I am not aware of any one who lives with their entire extended family and with close friends also. His fantasy is too far fetched and this is why I think it will not occur in reality, and if did, he would probably fail at that also. Michael demonstrates his lack of self confidence at the beginning of the story when he is asked to be the first to tell a story for the audience of family members for entertainment but he hesitates (that someone else go first); "He was very reluctant to take precedence of so many respected members of the family...he modestly suggested". ...read more.

The narrator walks through the long hall in the dark, noticing the "greenish light reflected in from the unripe moon" and she fiercely throws her self onto her bed. The window frames are fringed with frost - the outside is entering, and she lays there alone. This child has never needed to be angry before, she now has shown angriness and her innocence is no longer remaining. Her uncle Frank comes to her room, knocks and enters, and asks her about the event - he still doesn't believe her even after her opinion on the matter. His face is dark in the shadows of the moon light, and the narrator cannot make out his facial features. He tells her that in ten years from now it will all be forgotten and no one will ever know the difference - ironically she writes the story thirteen years later. The narrator then describes the fact that superman no longer comes to take her away - he no longer exists as her innocence is over. The darkness comes and the story ends with her now experience the real world with its torture and evil and suffering and non-fantasy like reality. This is how Plath conveys the use of colour and light within her piece, to show feelings towards multiple things. Both stories are superb pieces written by excellent writers. The fantasies are clearly shown in the way in which the writers convey a variety of techniques to add effectiveness to their work. Both stories share many similarities and some differences in the fantasies shown. Although the fantasies are different; one is a child's fun type of fantasy and the other is a serious adult kind, they both are used by the subject to get the perfect life - if their life was more like their fantasy life then they would have the ideal life; a better life. I thoroughly enjoyed analysing the pieces and found them interesting, exciting and unique. This assignment task was a challenge and most enjoyable. Ray Broderick English Fantasy Assignment Page 1 of 9 ...read more.