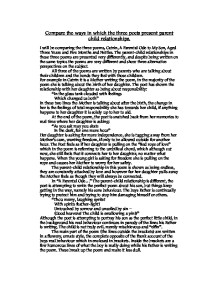 Compare the ways in which the three poets present parent child relationships. I will be comparing the three poems, Catrin, A Parental Ode to My Son, Aged Three Years and Five Months and Nettles. The parent-child relationships in these three poems are presented very differently, and despite being written on the same topics the poems are very different and show three alternative perspectives on the subject. All three of the poems are written by parents who are talking about their children and the bonds they feel with those children. For example in Catrin it is a Mother writing the poem, in the majority of the poem she is talking about the birth of her daughter. The poet has shown the relationship with her daughter as being about responsibility: "In the glass tank clouded with feelings Which changed us both" In these two lines the Mother is talking about after the birth, the change in her is the feelings of total responsibility she has towards her child, if anything happens to her daughter it is solely up to her to aid. ...read more.

The child is not truly evil, merely mischievous and "elfin". The main part of the poem (the lines outside the brackets) are written in a flowery, ornate style, the complete opposite of the frank account of the boys real behaviour which in enclosed in brackets. Inside the brackets are a few humorous lines of what the boy is really doing while his Father is writing the poem. These break up the poem and make it less dull. The poem "A parental ode..." shows the two sides of a parent-child relationship, like a flipping coin, a child's behaviour can change in a second, from "Thou imp of mirth and joy" To the child he really is, tipping over ink and "swallowing a pin!" So although the relationship is a good one, at times it becomes slightly strained when the boy is misbehaving, much to his parents angst. For example, in the third stanza the young boy is portrayed as "Thou human humming-bee, extracting honey From every blossom in the world that blows" The humming-bee is used as a metaphor, bees ...read more.

"My son would often feel sharp wounds again" That line is very vague, the nettles are not referred to which I think means that the son will often be hurt in the future but his Father will still try to protect him from anything which might hurt him. The same image is given in "A parental ode..."The young boys Father is also trying to protect his son from anything which might hurt him, "He's got a knife!" "He's got the scissors, snipping at your gown!" These are presumably shouted warning from the Father who is trying to write a poem, but his son is wandering round picking up things which could hurt him. In all these three poems the parent-child relationship is a protective one, the parents are trying desperately to shield their sons or daughters from harm. This is how the three different poets have presented the images of their relationships with their children, their feelings of responsibility and protectiveness towards the children. ?? ?? ?? ?? ...read more.