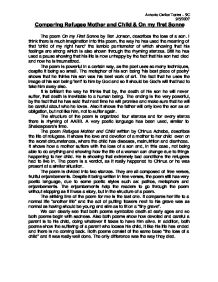 Comparing Refugee Mother and Child &amp; On my first Sonne

Comparing Refugee Mother and Child & On my first Sonne The poem On my First Sonne by Ben Jonson, describes the loss of a son. I think there is much imagination into this poem, the way he has used the meaning of that 'child of my right hand' the iambic pentameter of which showing that his feelings are strong which is also shown through the rhyming stanzas. Still he has used a pause showing that his life is now unhappy by the fact that his son had died and now he is traumatized. The poem is powerful in a certain way, as the poet uses so many techniques, despite it being so small. ...read more.

Also it shows the father will only love the son as an obligation, but not like him, not to suffer again. The structure of the poem is organized four stanzas and for every stanza there is rhyming of AABB. A very poetic language has been used, similar to Shakespeare's time. The poem Refugee Mother and Child written by Chinua Achebe, describes the life of refugees. It shows the love and devotion of a mother to her child even on the worst circumstances, where the child has diseases, malnutrition and diarrhoea. It shows how a mother suffers with the loss of a son and, in this case, not being able to do anything and showing how the life of a woman can change due to things happening to her child. ...read more.

It compares her life to a normal life "another life" and the act of putting flowers next to his grave was as normal as having should be young and slim as to fit on a "tiny grave". We can clearly see that both poems symbolize death at early ages and so both poems begin with sadness. Also both poems show how devoted and careful a parent is to his child, doing whatever it takes to have him alive. In addition, both poems show the suffering of a parent who looses his child, it like his life has ended and there is no coming back. Both poems consist of the same base "the loss of a child" and it was really well done. The only difference was the way they died. ?? ?? ?? ?? Antonio Carlos Tostes - 9C 9/5/2007 ...read more.