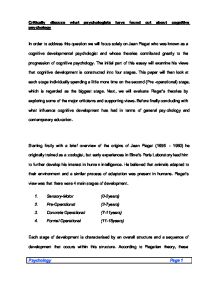 Critically discuss what psychologists have found out about cognitive psychology.

Critically discuss what psychologists have found out about cognitive psychology In order to address this question we will focus solely on Jean Piaget who was known as a cognitive developmental psychologist and whose theories contributed greatly to the progression of cognitive psychology. The initial part of this essay will examine his views that cognitive development is constructed into four stages. This paper will then look at each stage individually spending a little more time on the second (Pre-operational) stage, which is regarded as the biggest stage. Next, we will evaluate Piaget's theories by exploring some of the major criticisms and supporting views. Before finally concluding with what influence cognitive development has had in terms of general psychology and contemporary education. Starting firstly with a brief overview of the origins of Jean Piaget (1896 - 1980) he originally trained as a zoologist, but early experiences in Binet's Paris Laboratory lead him to further develop his interest in human intelligence. He believed that animals adapted to their environment and a similar process of adaptation was present in humans. Piaget's view was that there were 4 main stages of development. 1. Sensory-Motor (0-2years) 2. Pre-Operational (2-7years) 3. Concrete Operational (7-11years) ...read more.

In Piaget's findings the children in this stage of development believed that the sets were in fact of different quantity. Piaget argued that this occurred because the child is unable to conserve previous information. (Piaget 1952). Another classification of the pre-operational stage is that of "egocentrism." This is the child's inability to see the world from another's perspective. Piaget observed this in his "Swiss Mountain Scene" experiment (Piaget 1956). In this experiment the child was sat on one side of a model of three mountains, with a teddy sat at the opposite side. The child was asked to choose a picture that depicted the scene that the teddy was able to see. Piaget discovered that until the age of seven, a child is unable to perceive a different viewpoint, from its own and is therefore said to be egocentric. Piaget saw many of the problems of the pre-operational stage child emanating from this inability to "de-centre". (Gross 1999:634). The next stage is the "concrete operational" stage, which lasts from 7 - 11 years. In this stage, children can perform operations requiring logic such as conservation. But this ability only holds for what he terms as concrete situations. That is, the child is only able to perform mental actions on actual objects and not in abstract terms. ...read more.

Teaching Methods (how to teach) However in evaluating Piaget's contribution to education, Ginsberg (1981) claimed that Piaget had ignored the individual differences between children and that the emphasis was placed on discovery learning rather than academic knowledge. In conclusion, having evaluated Piaget's theory of cognitive development during childhood, which was (and still is) regarded as the major paradigm in psychology (which to understand the complex procedure of mental progression through different levels of thinking and understanding). It has both been challenged and embraced by many. Challenged in that Piaget's methodology may have underestimated many of the child's abilities, and additional considerations such as * Complicated language. * Unfamiliar materials. * Lack of context. * Children misinterpreting experimenter's intention. May have adversely affected a child's response. Such factors call into question the reliability of Piaget's findings. It may be that some of his tasks were easier and some harder, but for relatively trivial reasons (e.g. the child misunderstands the experimenter's intention). However it has been embraced in the field of education and for many years teachers have revised their approach in the classroom and applied Piagetian principles. In those terms he has made a substantial contribution to our understanding and appreciation of this complex subject area. As we have seen, much of his theory has been directly applied and accepted in modern education. Undoubtedly though its impact upon child psychology has been tremendous. Psychology Page 1 ...read more.